On Saturday when I got back from Cybher I noticed that four of my caterpillar’s were beginning a fascinating change.  When they are ready to become chrysalides they climb to the top of the cup, spin a silk pad and hang upside down from the pad in the shape of a “J”

One caterpillar however was quite a bit smaller than his friends and was still actively crawling around the cup.  We all found him fascinating to watch though, as if he got too close to the chrysalides they would shake vigorously – a natural instinct to warn off predators apparently!
On day 14 (the day before yesterday), he finally decided that he was ready to join his friends and spun his silk and started hanging. 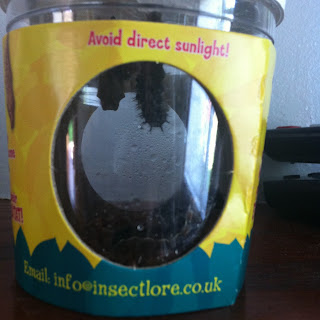 I left them for a further 48 hours as this is their most delicate stage and then transferred them to the hatching habitat.  If you have a young assistant I recommend that they sit and watch as it is quite fiddly and definitely not a job for little hands.

The chrysalides have attached themselves to a paper disc under the lid of the cup.  The instructions advise that you use a safety pin or sellotape to attach the disc to the netting of the hatching habitat, but i would say that a safety pin is a must as the sellotape I tried just wouldn’t hold them!

I was really surprised at how vigorously they all shook, and it made me a bit nervous that I was going to drop them, but with the exception of one that had fallen in the jar already, they are all still in place.  The fallen one is OK, and I have transferred it into the hatching habitat where it is resting on a piece of kitchen roll.

Isaac keeps watching them to see if he can see any changes, but they are very quiet at the moment.  It is truly fascinating to think that inside the cocoon is a period of very intense activity, for within the chrysalis, old caterpillar tissues are being broken down and rearranged to form the completely different cells, tissues and organs of the mature butterfly. 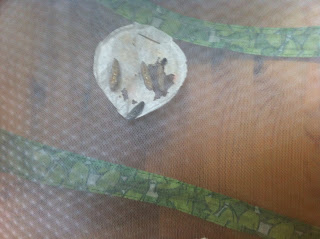