Skip to content
When Monkey Bizness closed down at Tower Park I had a tinge of sadness, as Isaac loved that soft play area.  We had an annual pass and went numerous times a week when he was a toddler – he even had his 2nd birthday party there!
I have to admit, we hadn’t been for a while, as it is a large play area and unless your child is quite independent, you do end up climbing through with them, which can be a struggle if you have a smaller baby in tow too!
When it was announced that Monkey Bizness was being re-opened by the owners of Splashdown I just had to visit.
Let me introduce you to Lemur Landings.
The play equipment is the same, only it has been cleaned and polished or replaced if it were broken.  In fact the slide was so fast I hit the mats at break neck speed, much to Isaac and Eliza’s amusement.
By their own admission, there is still work to do as many of the fixtures and fittings had been damaged so badly they need to be replaced, but they wanted the soft play area to be open for the summer holidays.  It is currently work in progress!

Isaac thoroughly enjoyed being back in his old stomping ground and Eliza loved it too!! 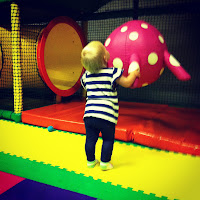 If you are looking for something to do on a rainy day, then this is perfect.  My 10 year old mindee was as happy charging around as the little ones, and the air guns provided hours of amusement.
They have even replaced the toilets, which was my old bugbear with this place, as it was once a nightclub and they used to use the same ones!
For more news of events and offers, like Lemur Landings on facebook or follow them on twitter.