Skip to content
Vampire Diaries is a teen drama, set very much along the lines of Twilight.  To celebrate the release of series 3, I was sent the first series to review.
The Vampire Diaries TV Series is based on the book of the same name, written by L.J Smith and is set in the fictional town of Mystic Falls, Virginia.  It follows Elena Gilbert, who is played by Nina Dobrev, who is getting over her parents death, and two Vampire brothers Stefan and Damon played by Paul Wesley and Ian Somerhalder whom I recognised from Lost. 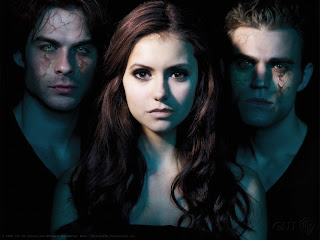 As you would expect, the Vampires are dark and brooding (and easy on the eye).  It is a fairly easy storyline to follow and shares many similarities with Twilight.  Elena is quiet and withdrawn following the death of her parents, whilst her brother goes off the rails. Elena meets Stefan on the first day of school and is instantly intrigued, but her friends Bonnie suspects something is amiss!
If I am honest, Vampire Diaries is not really my cup of tea.  I didn’t like Twilight either – I prefer my Vampires a bit more feisty like True Blood and my supernatural a bit more full on e.g. Walking Dead.  Mystic Falls is full of impossibly good looking people, as are most American drama’s these days.
That said, my 19 year old daughter loves it and has spirited the DVD away from me.
If you like teenage drama and have a thing for Vampires, then you will enjoy it………and if you have a teenage daughter then I am sure this would make a perfect stocking filler!!