I cannot believe it was a whole year ago that I interviewed Justin Fletcher about his new album Hands Up.  I remember being so nervous, but he was charming and really chatty.

Hands Up was, and has been, the music choice for the kids for the last year so it was a relief when I found out that he was releasing a new one.  Much as I love him, and the reaction his album gets, I can recite the Hands Up album word for word! 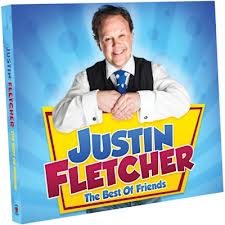 Track One and the album title is his new single “The Best of Friends (Best Friends Forever)”.  Whilst it isn’t as mad and fun as Hands Up, it has a lovely tune and sentiment about it.  If I am honest I didn’t like it at first, but after a few listens I have found myself singing along, and the main thing is – the kids like it!!

The Best of Friends Album was a saviour during half term as we had a couple of long car journey’s.  Justin has kept to his winning formula and added a disco beat to children’s favourites, only this time, there are more songs rather than Nursery Rhymes.  The track listing is:
Isaac was so excited that The Ugly Duckling was featured as it is his favourite song that Daddy sings him.  Eliza goes mad for the Clapping Song and we are trying to learn the routine now (not an easy one for a 2 year old and even Mummy gets confused).  Daddy loved One Man went to Mow, probably as it’s a song sang on the Chelsea terraces and I love Bibiddi Bobbidi Boo.  That said, the whole album is fun and Hubby and I found ourselves singing along to songs that we have grown up with!
If you are after an album for the kids to enjoy in the car, at home or even away – this is for you.  I guarantee you’ll be singing along in no time!
Justin Fletcher – The Best of Friends is out 4th March.

2 thoughts on “Justin Fletcher – The Best of Friends Album – Review”