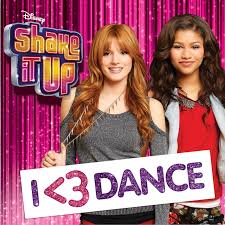 We tend to have one of four channels on in this house.  CBeebies and Nick Jr for the little ones and Disney and Cartoonito for Kian.

One of Kian’s favourite shows is Shake it Up on the Disney Channel – a sitcom which follows the adventures of CeCe (Bella Thorne) and Rocky Blue (Zendaya) who are background dancers on a fictional local show, Shake it Up Chicago.

I have to admit to sitting down and watching it a few times with him and I quite enjoy the mix of comedy and dance too!

I was sent Shake It Up I <3 Dance is the soundtrack from Disney Channel’s series Shake It Upto review and it features 17 hit tracks from Zendaya, Bella Thorne, Bridgit Mendler, Coco Jones. There is also a special remix of the theme song performed by Selena Gomez.

The album was a permanent feature in our car over the school holidays and although the little ones prefer Justin Fletcher it was quite nice to have a change and I was more than happy for them to listen to this as it had no offensive song lyrics or song meaning and mean’t that Kian could have music in the car that he liked too!

Kian did enjoy the album, although at 12 he does prefer his chart music now!  The real lovers of this album were the girls I look after aged 7 & 8 and my 9 year old God-Daughter.  This album was their idea of heaven and they insisted it came in the house so they could perform a dance-off and make up their own routines!

If your children like Disney’s Shake It Up, they will love this album and there is no vetting required before hand to make sure there are no “dodgy lyrics”.  All the songs have a dance vibe to them and wouldn’t sound out of place in the charts either, so all in all it is a thumbs up from us!!