I am a little disappointed that we have finished the Mark Warner Active Family challenge, as last week we attended the Family Adventure Festival in Bournemouth.

I wasn’t sure what to expect initially, but what we found was an event to inspire the children to get outside and have fun.  It wasn’t really aimed at littlies and if I am honest Eliza did get a bit bored, but Kian and Isaac thoroughly enjoyed themselves.
Kian was eager to try the Rollapaluza challenge and was ecstatic to beat the man he was racing.  I would have loved it if Daddy had been there though – would have made it even more competitive!

We had fun completing the Batak light reaction board, with Kian beating some much older competition…..

until his little brother had a go (with a little assistance)…….
There was much gloating from Isaac at that point!!
We then ventured outside and Isaac was a little disappointed that he was too little to try the zip line (until he actually saw how high it was).
There was lots to see and do, from football shooting to balancing, bike displays and climbing walls and even a giant inflatable slide! 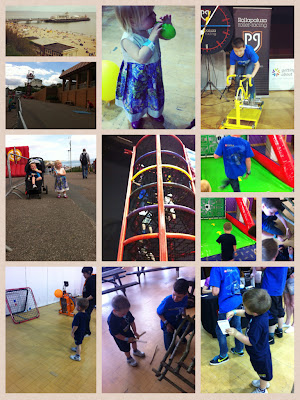 My only grumble was the lack of things to do for little ones, after all they can get outside and have adventuring fun too! 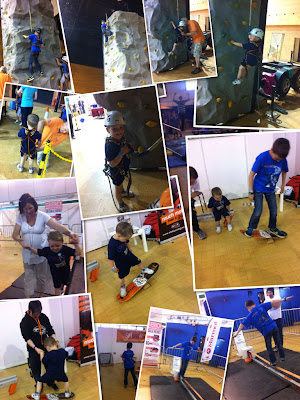 I was so proud of Isaac who initially didn’t want to try the climbing wall – he made it about a quarter of the way up and was so proud of his achievement.  He needs to grow a little bit taller so his reach will be further, but I am sure he will be able to get higher next year!  Kian scrambled to the top – three times, although he did find the hard level more of a challenge!
There were lots of free fringe events that we missed because I was away at the weekend, but we will definitely go back next year, and hopefully they will have more activities for the younger family members to do!