My 15 year old son is currently doing his GCSE exams but they don’t seem to be phasing him at all – not sure if that is a good or bad sign!

The thing that he is most bothered about is his School Prom and he doesn’t appear to be the only one.

I have done the Prom thing already with my eldest daughter and remember the shopping for a dress was a nightmare.  We had a strict budget to stick to and I was adamant that she bought something that she could wear again.  Thankfully we found the perfect dress for her and it did get worn at a few occasions before it was sadly outgrown. 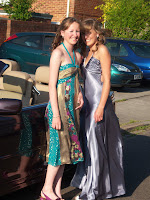 This time we were shopping for a label obsessed teenage boy.  Normally if it doesn’t say Hollister or Superdry he won’t wear it, and already had turned down suggestions of shopping in places he deemed “Fuddy Duddy” like Marks & Spencer, BHS and Primark.  He has been cruising the internet coming up with all sorts of expensive suggestions!
I was dreading it if I am honest and enlisted the help of his older sister for some support.  We headed off to the newly re-opened Whiteley Shopping Centre in Portsmouth, where most of the shops are aimed at the younger market and are all close together.
The first port of call was River Island, where are big sign in the window said “£30 off suits” – a brilliant start.  He made a bee-line straight for a gorgeous blue suit and it was then we hit our first stumbling block.  Having never bought him a suit before we had no idea of his sizing, so we asked the assistant if he had a tape measure………….guess what – a shop selling menswear with NO tape measure!!
We ended up going for the smallest sizes available as my son is tall and lanky and thankfully it fit – he looked very smart and the suit came in on our budget of £100 with the £30 off…………only it didn’t!
To get the money off you had to buy the waistcoat too!
Back to the drawing board!
We spotted Moss Bros on the other side of the parade and headed there.  After an initial heart attack at the price of suits (think £400+) I decided to ask if they had any budget slim fit suits.  The assistants fell over himself to help and pointed me in the direction of an offer for a suit (jacket and trousers) plus shirt and tie for £129.  It was over budget, but Callan had some money from Nana to put towards it, so we had a look.
Callan was measured properly and then given a suit almost identical to the one he tried on in River Island to try – it fitted perfectly.  He then selected a white shirt and purple tie and done – his suit was chosen!
He still had some money left over from Nana, so we went on a shoe hunt.  We went in Jones (who I thought were cheap – wrong!), where nothing was less than  £70; Schuh was much the same and eventually found a gorgeous pair in Top Man for £32.
What I thought would be a painful and dragged out experience took less than an hour and Callan adores his suit that will also be worn for a wedding and a christening this year!

Now all he needs to do is earn the money to pay for his ticket – can’t believe they are charging £30 each, surely the school PFA should be paying for occasions such as this!
Thankfully we won’t be stung for a Limo as we know people with far cooler cars to turn up to a Prom in and I cannot wait to share those pics!

2 thoughts on “GCSE Stress? Nope – it is all about the School Prom!!”