Whilst out enjoying a tour of the Jurassic Coast with Poole Sea Safari last week, the boys were introduced to Coasteering – exploring where land meets sea using skills such as swimming, climbing and jumping into the water.

They were so enthusiastic about what they had seen, I immediately started looking into it and found several companies that all offered the experience.  Not knowing which to choose I tweeted @Dorset_Hour during their weekly session to see if there were any recommendations.

Studland Sea School introduced themselves to me on twitter and pointed me in the direction of their twitter / facebook competition to win a Coasteering session for Sunday.  I retweeted and shared and was gobsmacked when I won.

The session was aimed at 16 years and over so Kian couldn’t join in, but my eldest son Callan went with my daughters boyfriend Paul as hubby was working.  They do however offer family sessions, which we are going to book for Kian’s birthday in August.

It was an early start as we had to meet at the Dancing Ledge car park at Langton Matravers at 9am.  Getting a teen out of bed is always a challenge, but thankfully I managed it eventually and we set off.  We found the car park with no problem and Callan and Paul changed into the equipment provided – a full 5mm winter wetsuit & neoprene socks to keep them warm, protective gloves, helmet and buoyancy aid to keep them safe. 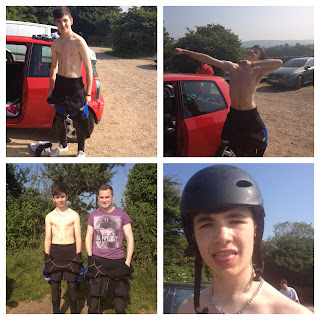 They then faced a 20 minute walk down to the coast where the adventure begins.  The walk is very steep and a challenge, especially when wearing wetsuits so they were eager to get into the water and get started. 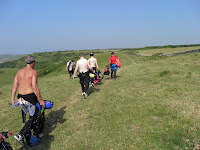 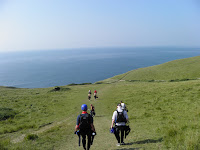 Once at the bottom they made their final preparations………… 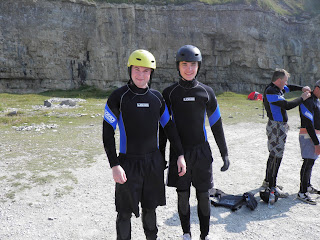 The team were given a safety briefing before getting the chance to cool off in the Dancing Ledge swimming pool which was blasted into the rock at the beginning of the 20th Century for use by local schools. 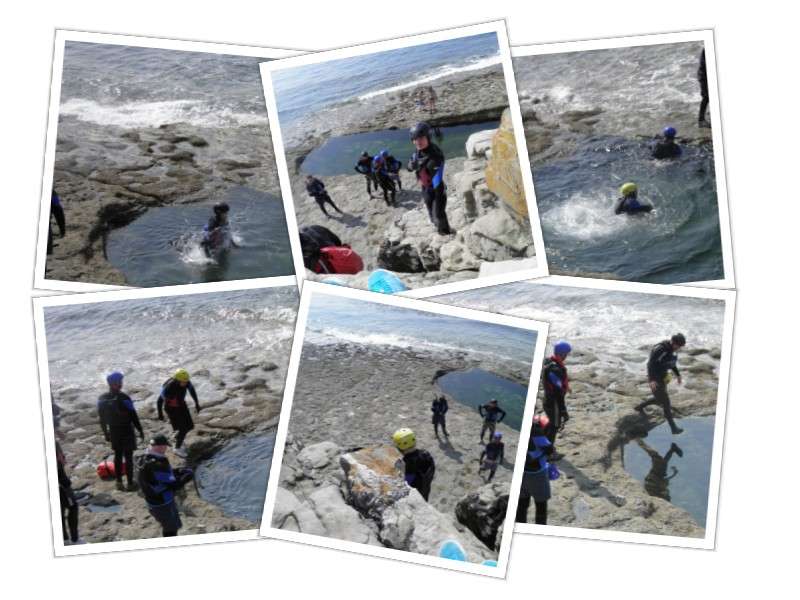 Then it was time to set off, exploring caves, jumping into the sea and scrambling along the rocks. 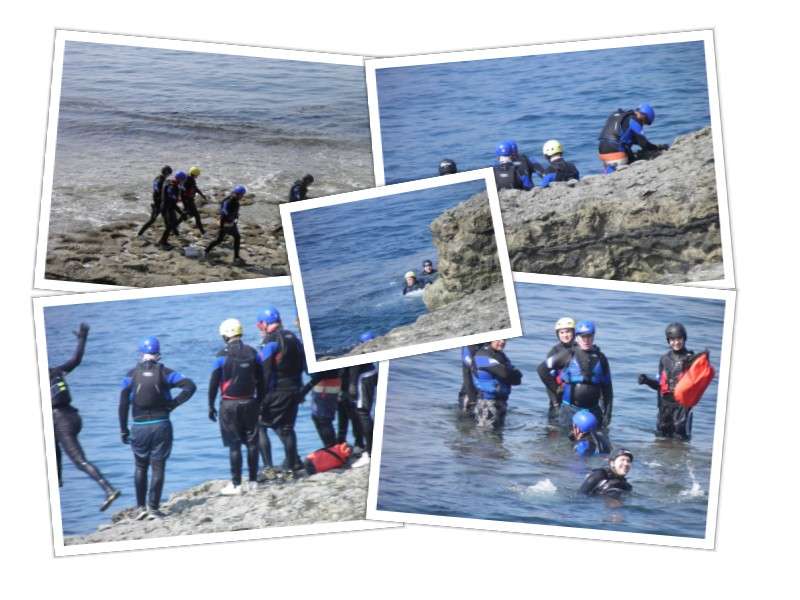 They started off with a small leap into the sea and as they got more confident the challenges increased.  The team jumped into the water at designated spots and then swam to their next destination, where they had to climb the rocks to get back out of the sea.  There were two fully licensed guides there to ensure the group’s safety and provide encouragement when needed. 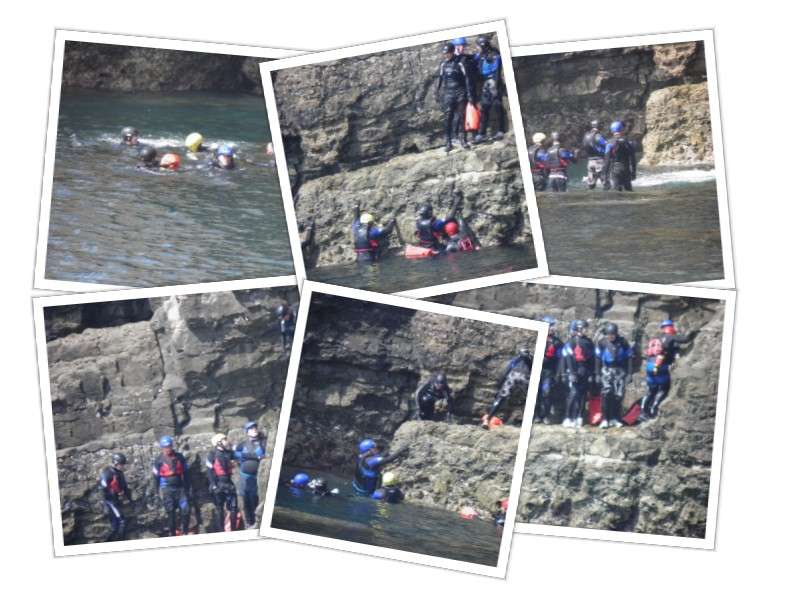 Callan and Paul thoroughly enjoyed themselves and although they did do some wildlife spotting, the cave exploration and high cliff jumps were the stand out moments from the day.  Sadly we couldn’t get pictures from where we were stood watching. 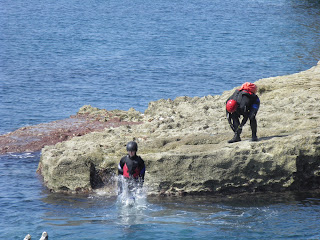 You certainly have to be a moderate to strong swimmer and physically fit to take part as Callan remarked that they swam a long way and with all the climbing he was exhausted by the end of the session!  I was concerned that the sea would be cold but I was assured that they were kept nice and warm in their wet suits.

Callan’s comments afterwards was that the experience was “Amazing” and “Awesome” and he cannot wait to do it again. 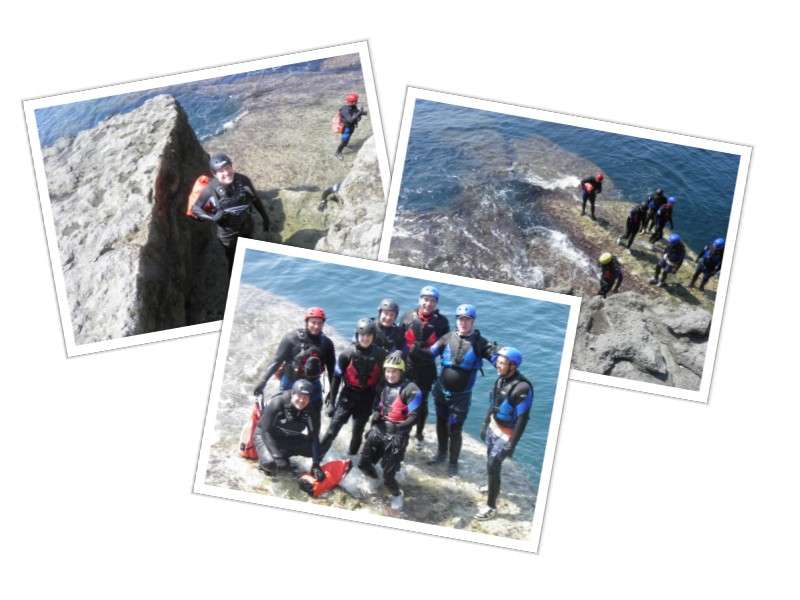 We cannot wait for our family session for August, although not looking forward to the hill climb on the way back!

For more information about Coasteering, Kayaking Tours and more, see Studland Sea School on facebook and / or follow them on twitter at @studlandsea and also on G+ and remember that pre-booking is essential!