I cannot say I have ever looked forward to a Disney Pixar film more than I have Monsters University.

I absolutely adored Monsters Inc and Sulley and Mike are still among the favourite cuddly toys in our house and Eliza has acquired the nickname Boo, so when I was asked to review the Monsters University Soundtrack I jumped at the chance. 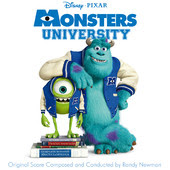 This soundtrack is actually the score which is written by Randy Newman and has the classic sounds from Monsters Inc and Toy Story.
Having not yet seen the film I found no affinity with the music, and although I did enjoy the melodies, only one song had words – Monsters University.
I am sure once we have seen the film and we are able to put the scenes to the score that it will become a firm favourite in the car, as a change from Disney and Justin Fletcher, but on its own having not seen the film, I struggled to enjoy it.