Two Fridays ago was V-Day and I wrote a brief post about how I was feeling whilst sat in the waiting room, but nothing about the procedure itself.

I don’t think hubby was quite prepared for what was going to happen despite having more than one appointment with his GP who explained the procedure and he fully admits that he won’t be a poster boy for it.
When asked what he felt like all I could get out of him was “OUCH!”.
If you’ve ever had a local anaesthetic you will know how much they sting and I cannot even begin to imagine having one downstairs.  He was expecting to have one injection to numb the area, but actually had to have one in each testicle plus one on top of the penis plus a bit of a top up.  He admits he could feel everything, especially when they cut the tubes.
The actual procedure took just 20 minutes and he emerged walking a bit like John Wayne, clutching a couple of sample pots and leaflets about his recovery and I drove him home as gently as I could. 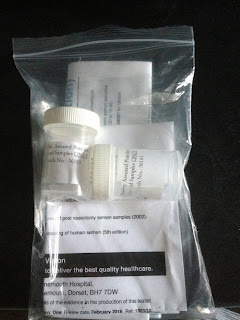 For pain relief all he was advised to take is paracetamol and ibuprofen, which apparently just takes he edge off the pain.  He also gets to wear some very fetching brief style pants which he finds terribly uncomfortable, although they are most amusing for me as they’re just like our 5 year old wears (without the motifs).
Probably the most difficult part of his recovery was trying to stop the children jumping into his lap for a cuddle – we had to tell them he has hurt his leg!
Hubby was back to work the next day under strict instructions not to do too much, no heavy lifting and no driving.  In all honesty it was too soon, but he doesn’t get sick pay and it stopped the kids leaping all over him.  He describes the pain as a dull ache and feels very swollen down below.
He managed three days of no driving before he felt he was able to drive again but the aching feeling only just begun to subside 10 days later.  He was finally  brave enough to have a look at the work on day 7 and described it as “colourful” thanks to the bruising.
That’s not the end of it though. He has to, how do I put it, perform what teenage boys like to do (a lot) 24 times before he can take a sample into the hospital to check the procedure has worked.  Thankfully he has 10 weeks to do this and as a bit of a joke I have bought him the least Christmassy advent calendar I could find and filled it with chocolates as a reward, and so we can keep track of his progress.

…..but it turns out Eliza managed to get passed the stairgate her brother left open  and sniffed out the chocolate!!  It’s now where she can’t reach it!!

13 thoughts on “The Vasectomy”