I am not sure what it is, but around the age of three my boys have all of a sudden switched from toddler TV characters such as Bob the Builder, Fireman Sam etc to the world of Superheroes.

Isaac’s first superhero was Batman, and we have collected a substantial amount of Imaginext toys to feed his obsession.  Things have moved up a level now, with a fascination for Superman, Spiderman and Green Lantern.

When I was offered DC Superfriends Magazine to review I knew he would love it…….and he did! 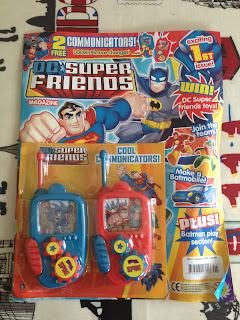 Aimed at pre-school boys aged 2-5, Isaac is at the top end of that age group.

He wasn’t interested in the communicator toys on the front, but Eliza soon took them off and enjoyed playing with them whilst Isaac read the magazine. 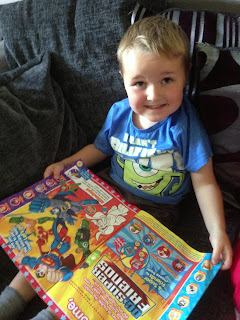 The magazine is full of creative learning exercises, colour and keep pictures and make and wear activities.  Isaac really enjoyed the story and we used it as reading practice instead of his school book.  He read well, sounding out the bigger words but did have to be helped on occasions.

After the story he did some colouring and practiced drawing some of the characters by copying them, but if I am honest the magazine is too young for him and he soon lost interest.  I think it would have been perfect for him last year.

DC Super Heroes goes on sale on 19th September 2013 in all good supermarkets and newsagents.