You cannot miss the advert on the TV, a cute pure white seal with bright blue eyes being loved by the kids playing with him.

Having seen the advert on the television, both Isaac and Eliza wanted their very own Sugar, and their wish was granted when we were offered one to review.

Sugar the Seal by Emotion Pets is a cute and cuddly snow white seal that can blink his bright blue eyes and moves his flippers and tail. 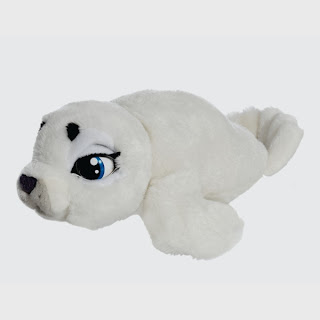 He moves himself along when placed on a flat surface, although he would struggle on longer pile carpet and the mechanical noises are quite loud.

Feed him the fish that comes with him and see his mouth move and hear him chew.

When he falls asleep you can hear his snores which is rather cute and not too loud.

As you can see Sugar is quite big, but both Isaac and Eliza love to give him a cuddle and a stroke but we are still learning to identify exactly what he wants. 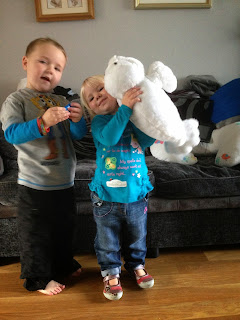 Like a real pet, Sugar could be hungry but if he isn’t he will refuse to eat.  He doesn’t like loud noises (he had better get used to that in our house), and will close his eyes and lower his tail but he can be reassured with a cuddle.

If you leave him alone he will get bored and call for you to play with him, but if you do not play with him he goes to sleep and closes his eyes, which is great as it saves the battery.

Thankfully you can switch him off when not in use too.

Both Isaac and Eliza enjoy playing with him – even fighting over him at one point, but he is quite expensive for essentially a cuddly toy that moves (RRP £59.99).  The fish has disappeared a couple of times too and he won’t eat anything other than the fish.

That said, I have seen a few half price offers around and if your little one is desperate for their own pet but you don’t want to tie yourself down with a “real” one, this is a really good alternative.