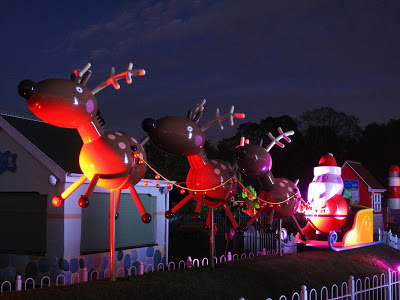 On Saturday, we were very lucky to be invited to Paultons Park, the Hampshire-based theme park, which is home to the world’s first and UK exclusive Peppa Pig World.  If you are followers of my blog you will know we go quite frequently but this time we were going to see a sparkling wonderland, complete with a snowy grotto.
At Santa’s Christmas Wonderland, you wander through an enchanted winter scene where animated characters, including Rudolph and Donner, sing and dance.
Our tickets were for 11.30 but we arrived at the park nice and early to have a look around and have fun on some of the rides.  We were advised to get to the Christmas Wonderland 15 minutes before our ticket time stated. 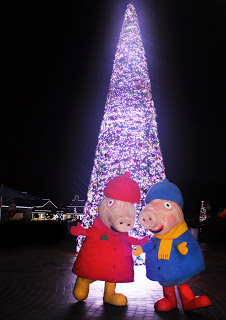 As we got there we were advised by one of the elves we could not take the buggy through, however I was happy leaving the buggy in the buggy park as it was under the constant supervision of the elves, so we parked up and went inside the snowflake covered tent to begin our journey to the North Pole.
We got in the queue and amused ourselves with counting the snowflakes and trying to remember the name of the reindeer that pull Santa’s sleigh – I always forget one!  We were inside the tent for 15 minutes before we showed our tickets to another elf at the door to the Christmas Wonderland.  Each ticket had the child’s age and sex on it plus a space to write their name, which we had to do before they let us in.  I strongly recommend you do this before though. 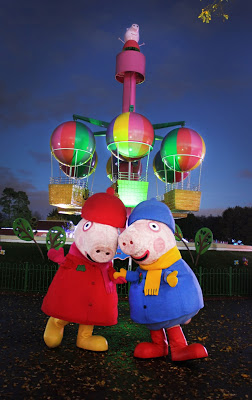 Once inside the building we were greeting by a child’s bedroom scene, complete with magical toys and a very life-like doll sleeping in bed.  The little ones were in awe!
We then proceeded through a sparkling tunnel of lights into a snowy wonderland, complete with adorable large and small animated characters who were singing very catchy Christmas songs.  There was something to see at every turn and Isaac and Eliza were excitedly pointing out what they could see as well as having a little boogie.
The characters were so well animated that it really looked as though they were singing the words to the songs as the mouth movements were impeccably timed, but my favourite character was a little white seal balancing a sparkling spinning snowball on its nose.
As we crept further into the Christmas Wonderland we spotted a sign for the North Pole and as we rounded the corner and crossed the bridge, there were Rudolph and Donner just outside Santa’s Toy Factory, complete with Candy Cane front doors.
Inside the Toy Factory was a bookshelf filled with letters to Father Christmas, elves busily working on their toys and even a train running around the top of the room.  I did feel rather sorry for the teddies who were on the reject shelf though, but we had no time to mope – it was our turn to see Father Christmas.
We handed over our tickets and were ushered to see the big man himself.  He was so friendly and welcoming that Isaac started chatting to him without my encouragement.  Even Eliza spoke to him, which was a surprise as last year he filled her with terror.
We didn’t feel hurried and Father Christmas took a real interest in what the kids had to say. He even let us pose for some photographs before handing over some presents for the kids before sending us on our way to enjoy the park.
Thankfully there was an elf on hand to rescue my buggy, as by now it was buried at the back and I was struggling with Sebastian and all the coats as we had to take them off half way round as it was so hot.  I couldn’t believe it when I looked at my watch when we came out that we had been inside for an hour – no wonder my arms hurt and not one moan from the kids either!
My tips for visiting Santa’s Winter Wonderland at Paultons Park are:
The only thing I found disappointing is that Father Christmas didn’t speak to them using their names, so I did wonder what the point of writing their names down had been.  They did get lovely good quality age and gender related gifts though.
Next stop was Peppa Pig World and it was covered with twinkling illuminations, Christmas trees and even Santa on his sleigh – just like the one from the cartoon.  Everywhere you looked there were decorations to catch your eye and Eliza was particularly taken by the “worlds biggest Christmas Tree” (her words). 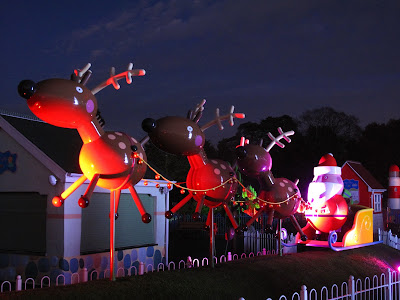 All of the rides and attractions were open in Peppa Pig World, apart from Muddy Puddles. We had fun sailing in Grandpa Pigs boat, riding in his train, driving Daddy Pig’s car and visiting the Windy Castle.
I have to say that Peppa Pig World is just as fun this time of year – you just have to wrap up a little warmer.
After picking up some exclusive Peppa Pig Christmas gifts in their shop, we finished off our day with a trip to see Santa’s 4D Sleigh Ride which had us hanging onto our seats and even jumping out of them in places.

Santa’s Winter Wonderland costs £20.75 for children and adults aged 3 and up.  Children under 3 are £15.50 and babies under 12 months that are receiving a present are £5.50.  This includes entry to the park as well as seeing Father Christmas and most of the rides are open with the exception of the water rides and much to Kian’s disappointment the Edge. 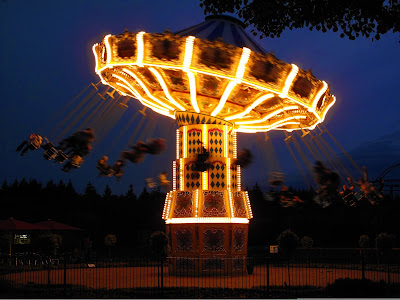