Eliza is Sofia the First mad so you can imagine her excitement when the Royal Prep Academy Backpack arrived for her to review.

The wearable Sofia Backpack opens up to reveal a magical Micro World. When the backpack is opened, different play areas are revealed which include the library, classroom, dance floor, art room, stable and courtyard.

We couldn’t wait to un-box it and were soon met by the first challenge………….. how to open it?

I searched the box and there were no instructions to be seen anywhere and it took a good five minutes of fiddling with the bag to open it up.

We did find a page of stickers to apply to the playset which can only be described as fiddly!  A bouncing, excited three year old and her baby brother hanging off my leg didn’t help matters, and I found the brief instructions on the back of the stickers confusing – I would prefer that the set arrived complete.

Once I finally managed to get the stickers in the correct position it was almost time to let Eliza loose with the set, however on the box it said the immortal phrase “Requires to AAA Batteries”.  I found the on-off switch with no problem, but again it took a few minutes of hunting to find where the batteries went.

Now it was time to play! 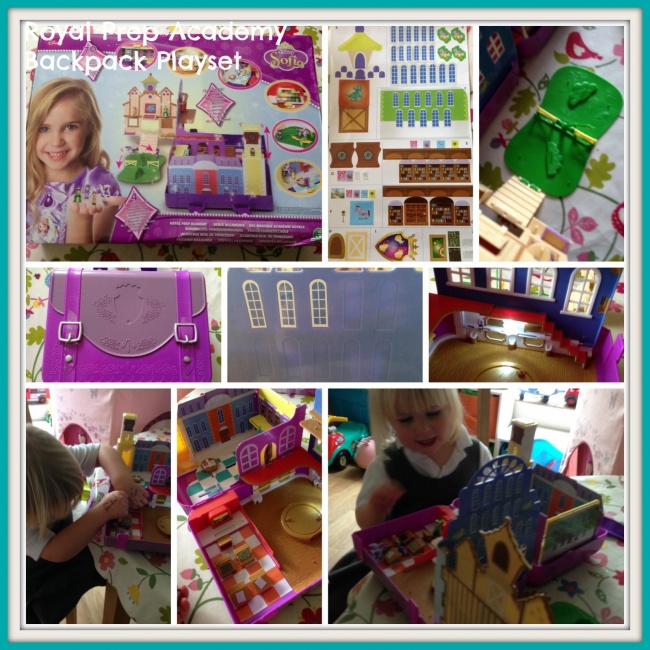 The set comes with four tiny figures – Sofia, Minimus, Prince Zandar and Fauna which all have little holes on the bottom to secure them in various rooms in the set.

The classroom has four desks for the students to sit at. One desk can be opened and one has a centre which reveals gems when turned.  At the front of the classroom the teacher has a podium and if you stand one of the mini figures on the peg you can move them across the classroom, as if they were writing on the board! If the light is on in the dance studio, as the teacher goes to the left a light in the black board lights up.  This is also where the batteries are inserted.

In the centre of the Academy is a dance studio with a spinning dance floor to help Sofia learn how to dance.  There are mirrors all around the dance studio, so Sofia can see how well she is progressing and a wall fixed ballet barre, for her to practice her ballet moves plus a light which can be turned on and off that shines directly onto the spinning dance floor.

The library is stocked with many books for Sofia and the other students to learn from. As the books are stored high up the moveable ladder comes in very handy for getting the books the students require – simply place a mini-figure on the ladder, and then it can slide from one side of the library to the other.  There is also a secret door to find and as the library in the Academy is a quiet place, you can move Sofia from one end to the other, as if she is floating across the floor by placing Sofia (or any other mini figures) on the centre peg and use the lever to move her from one end to the other.

Eliza’s favourite part of the set is making Minimus fly up and down in the court-yard by spinning him to the top of the clock tower and watch him spin all the way down.  He is a bit fiddly to attach though and she needed my help to do it.

In the stables are place Sofia on Minimus and put him on the flying stem and spin him around so he jumps the fences and bushes. There is also hay for Minimus to eat and places for the teachers to stand so they can watch over the flying lesson.

The set is aimed at children aged 3 and over, but I would say that Eliza (almost 4) is too young for it.  The figures are difficult to attach to the pegs and folding the set again takes a lot of practice.  The other disappointing thing about the set is that it is advertised as having phrases too, but I have been unable to find out how to do this as there are no instructions!