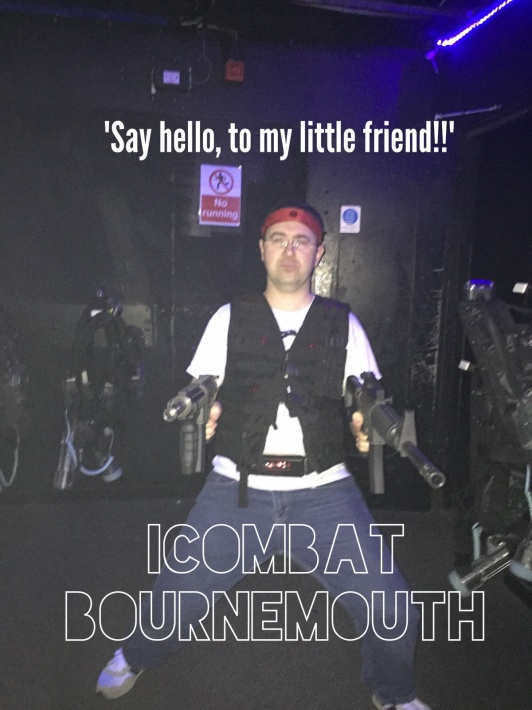 My boys adored Laser Quest and for a few years they were the birthday party of choice.

As they have got older they still enjoyed it but wanted something more and that more has just arrived!

It was abundantly clear that hubby and Kian were planning on taking the game very seriously from the start and with scenarios which include: Team Deathmatch, Last Man Standing, Zombie, Medic, and SWAT they got to reinact their favourite XBox game, Call of Duty, live!

The first thing to do is get kitted out, and it’s some kit!

Firstly there is the irVest, a full-scale MOLLE vest that houses 20 sensors that light up and beep when hit with iCOMBAT weapon shots. The StressX shocking belt delivers a pain penalty to the wearer when hit, which raises stress levels and ensures the most tactical game play ever – this belt has 5 shock settings from mild to strong, but what you don’t realise is that as you play the game and get hot and sweaty these can make the shocks feel stronger. The belt was set to vibrate for Kian as he is under 18. (StressX belts are optional)

There is also a headband to wear which enables any head shots to register – not a dodgy fashion accessory like I first thought and of course the guns – Full-scale replica irM4’s and irPistol’s, offering full recoil and realism, plus if you run out of ammo you have to insert a new SmartMag into your weapon to continue shooting which is far more realistic than anything we have seen before. 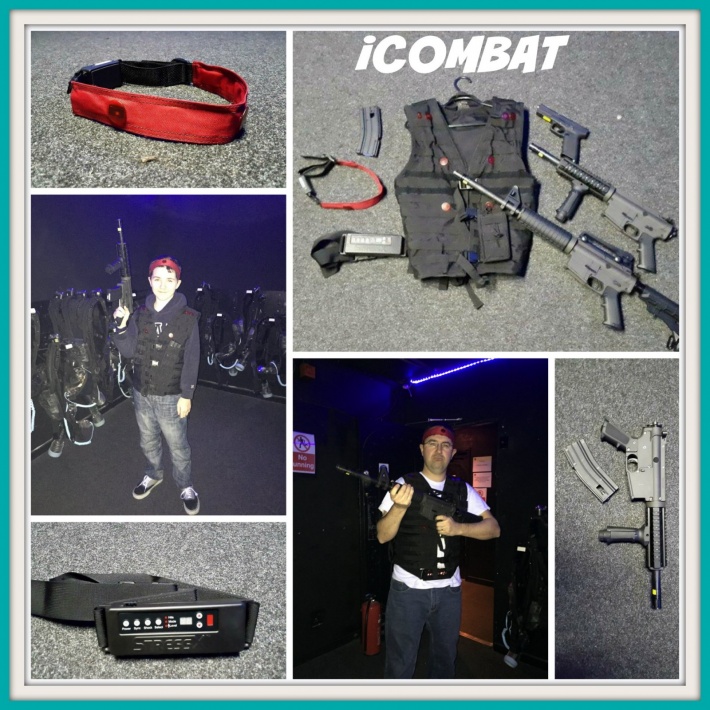 Kit on and secure and it was time to begin.  Brave hubby had his shock setting at 5 which I did think he would turn down after one game but he persevered.  He did make the mistake of laying on the floor at one point which is a big mistake as it makes the shocks more powerful as the belt is pressing harder on your skin. (I didn’t laugh too much – honest!).

What they really liked about iCOMBAT were the weapons which are modelled after real-world components. Their size, form, and function are just like the real thing. This means slings, sights, stocks, and other add-ons attach seamlessly.  Pull the trigger for a live bang, recoil, and bright muzzle flash and Out of ammo? Drop the mag and slam in a new one!

They played several games in the Laser Quest arena:

The first – Deathmatch is a basic iCOMBAT scenario where teams go head-to-head to see who can get the most eliminations. Fight throughout the laser quest arena and use brute force to win the day. Your team should cover each other at all times and use basic strategy to complete the mission. Each player has two lives and must return to base to respawn. The mission runs for 5 minutes, with the winner having the most eliminations at the end.

Domestic Threat (known as Search and Destroy in Call of Duty) – Terrorists have hidden a dangerous package in the arena and the police have no idea where it is. The terrorist team will hide a backpack, while the other team faces away. Once the game starts, the police team must find the backpack and bring it back to their starting location before it detonates after 8 minutes. The terrorist team wants to protect the backpack until time runs out. Police win if they secure the backpack in under 8 minutes and the terrorists win if they successfully defend it for 8 minutes. 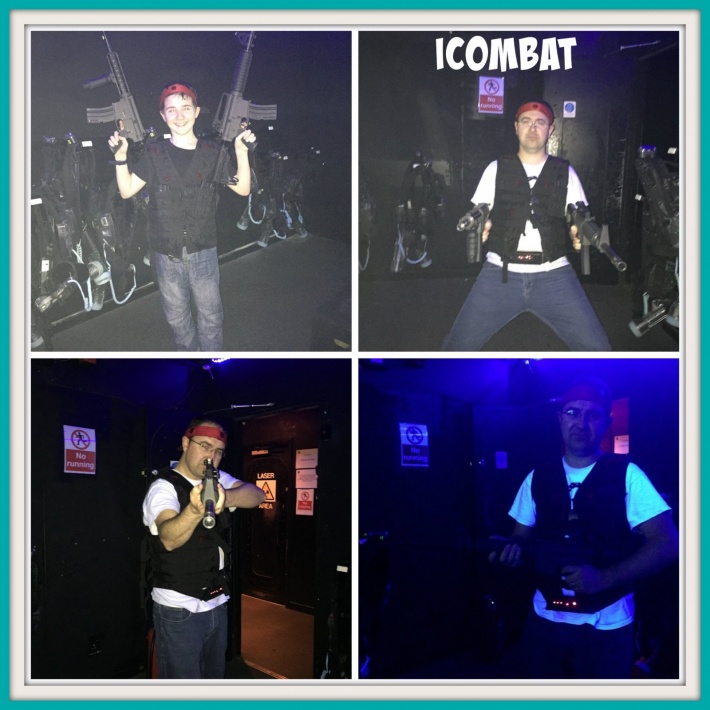 Strategy and teamwork are essential in this variation of Deathmatch. Two teams face off each with 1 medic. After players are hit the second time, they will be wounded and cannot move. It is up to the team’s medic to respond to the cries and get to the player. Medics will instantly revive players by getting within a few feet of them. The team with the most eliminations at the end of 5 minutes is declared the winner.

By far their favourite game was Cops and Terrorists as they got to use the entire facility to play.  The Terrorists had a headband which they had to hide and protect.  The idea of the game was for the cops to eliminate the terrorists and protect the hostage, i.e. the headband, which was able to register any shots which meant the cops had to be careful when attacking.

iCOMBAT Bournemouth opens on Thursday 2nd April and I urge you to like them on facebook to get more information and watch my brother-in-law get shocked by the StressX belt – just wish the video was on YouTube so I could embed it on my blog.

iCOMBAT is the perfect adrenalin activity for teens aged 14 and over through to adults and I can see this being a stag night activity choice for many.