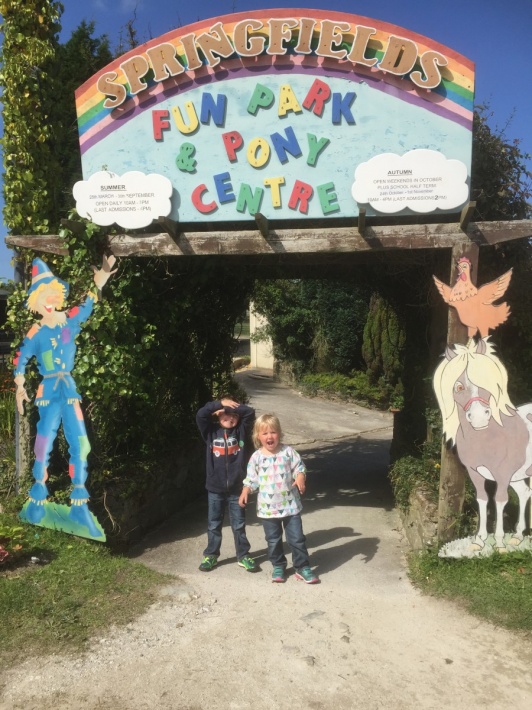 Last weekend we went to Cornwall and stayed at the beautiful Trevella Park. As part of our stay we were invited to visit some of Cornwall’s top attractions and as we have visited Cornwall a number of times before I decided to let the kids do the choosing.

Springfields Fun Park just outside Newquay was one of their choices. A traditional family run fun park it offers pony rides, meeting the animals, a train ride, boats and lots of playground fun both inside and out.

Getting to Springfields did prove to be a slight issue as there were no signposts and our satnav Beryl told us we had arrived at our destination in the middle of a country road. Thankfully we persevered and found it after another minutes drive – you really cannot miss the huge barn!!

There is plenty of parking outside and the kids couldn’t wait to go inside. You enter straight into the play barn which is packed full of toys to play with, a soft play area and two giant slides. I didn’t think we would ever see the outside of the park at one point as they were content to be playing inside. 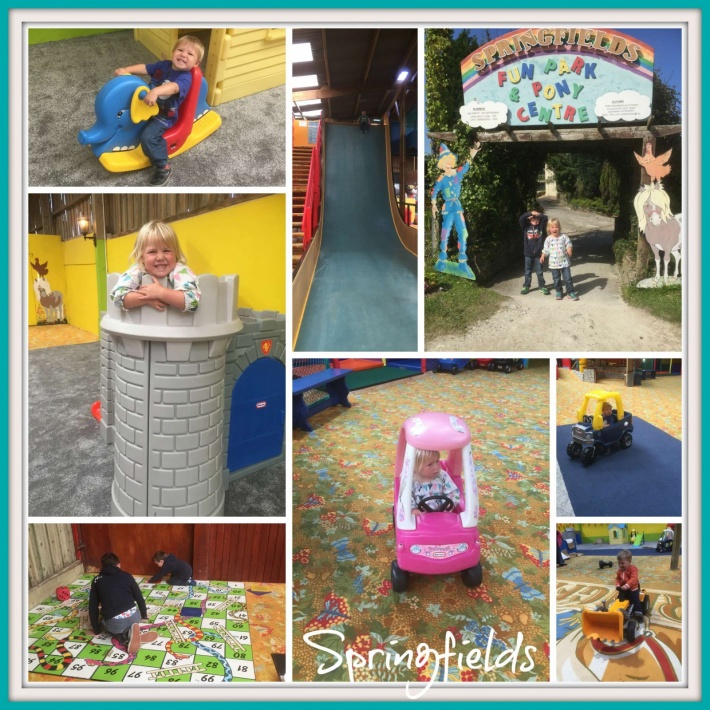 We did manage to get them outside eventually and headed off to explore the rest of the park. Sadly we arrived after the bottle feeding of the lambs but there was still plenty to see and do and meeting one of the ducks and her adorable ducklings was a highlight. 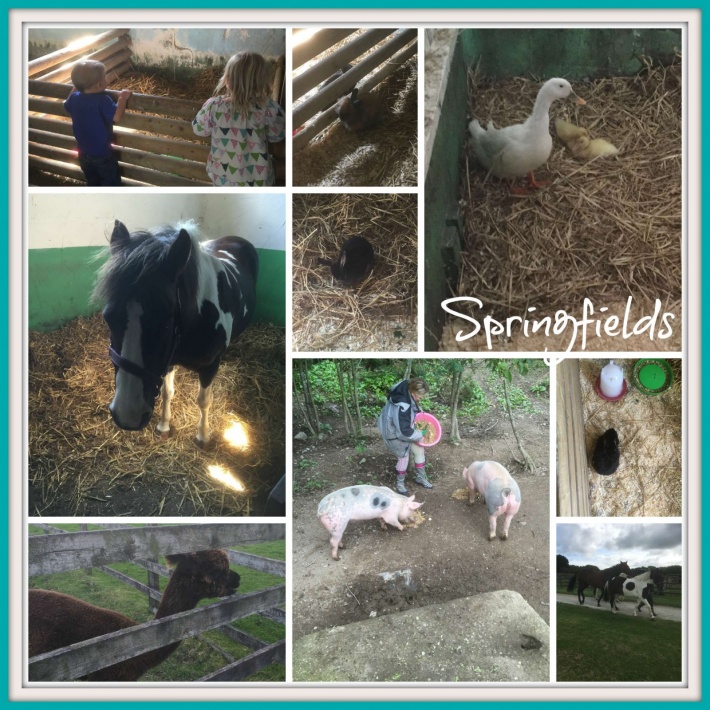 The real beauty of the park has to be the amount of space there is on offer, with a variety of things for all the family to do. If you don’t want to see the animals you can ride on the Go Karts, play in the numerous play areas, go rowing on the pond or do a woodland walk. You could easily take a picnic and spend a full day there.

Eliza and Isaac really wanted to ride a pony and there are various options on offer which included a walk around the paddock, a slightly longer walk around the lake or if you pre-book you can also take a pony trek through the woods. We took the pony trek through the woods which took around 20 minutes, with Eliza riding Ace and Isaac on Tallulah. It was a gentle walk around a course which had the added fun of listening to the pony’s hooves trip trap over a bridge and squelch on some mud as we went past. The staff were fabulous and talked to Isaac and Eliza the whole way around, pointing out gushing stream or berries on the bushes as they went past. 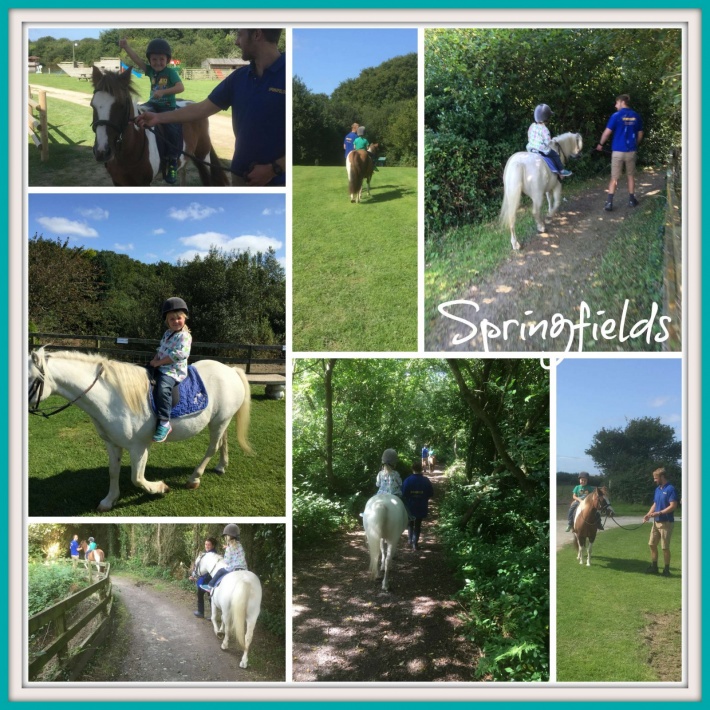 Whilst we were on the pony trek Hubby and Kian took Sebby on the rowing boats on the lake and spotted some giant fish in the water. 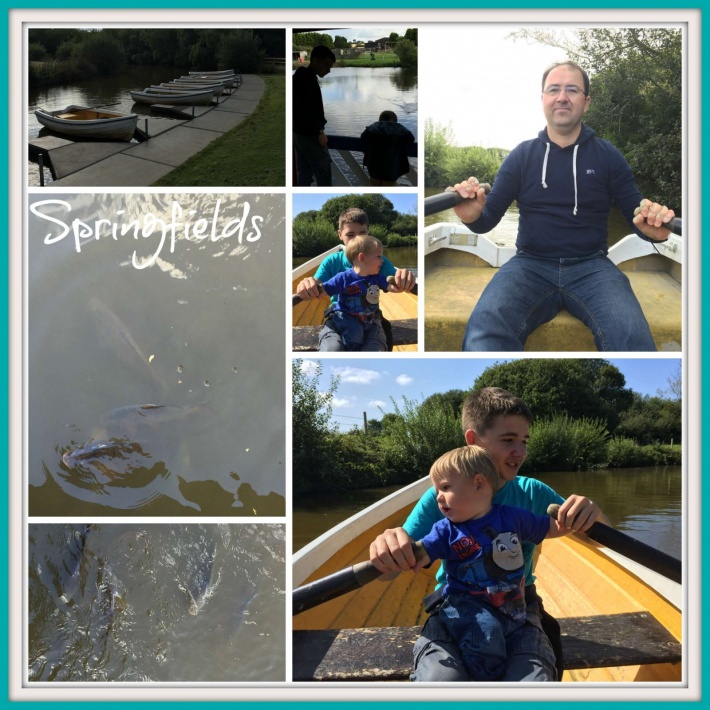 Afterwards we took the opportunity to explore the outside play areas. The more you explore, the more you find. There was a large wooden pirate ship near the goats, a huge wavy slide over the bridge on the island. A large obstacle course near the Alpaca, toddler swings by the pony paddock and a large wooden train, a castle and trampolines near the stables. 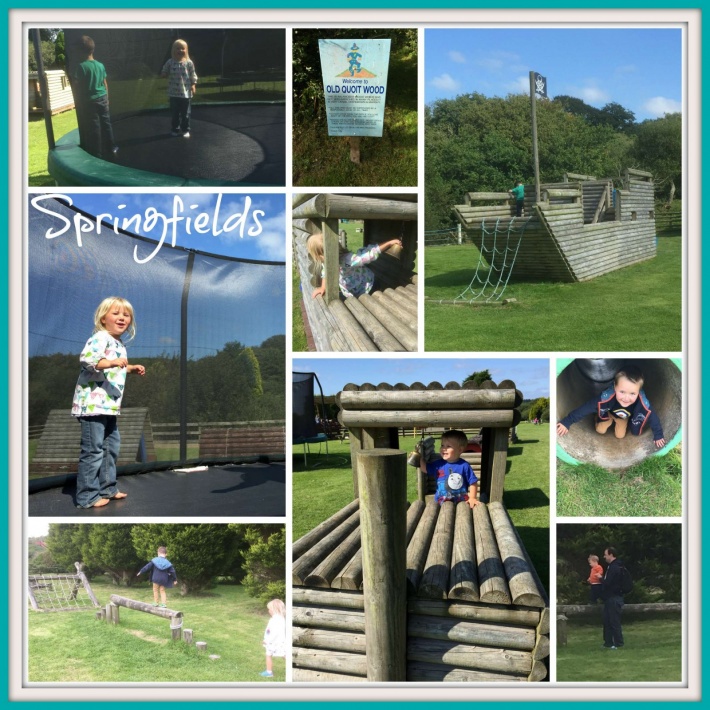 Of course we also had to go on the Land Train for Sebastian which takes you around the farm so you can see all the animals and areas there are to play in. 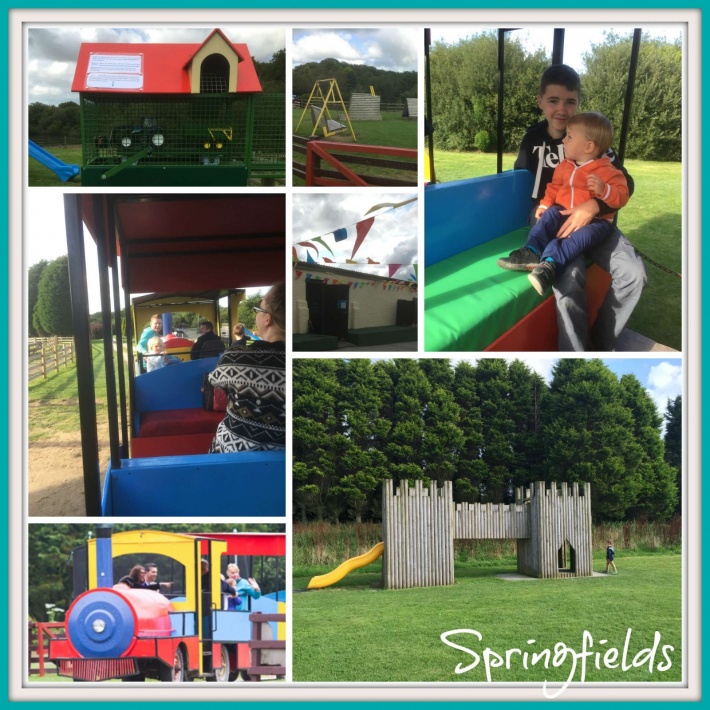 Springfields is the perfect place to take a picnic, however as we were staying in a caravan shopping was the last thing on our minds so we had lunch in their cafe.  They serve both hot and cold options, with choices of sausage rolls, pasties, nachos and lunchboxes for the kids and all reasonably priced. It was also nice to see a baby station where you could warm up baby food and bottles.

Also inside next to the soft play frame is the Enchanted Forest, all lit up in neon lighting. With a small village to explore and glowing clothing, Isaac and Eliza were playing inside for ages. 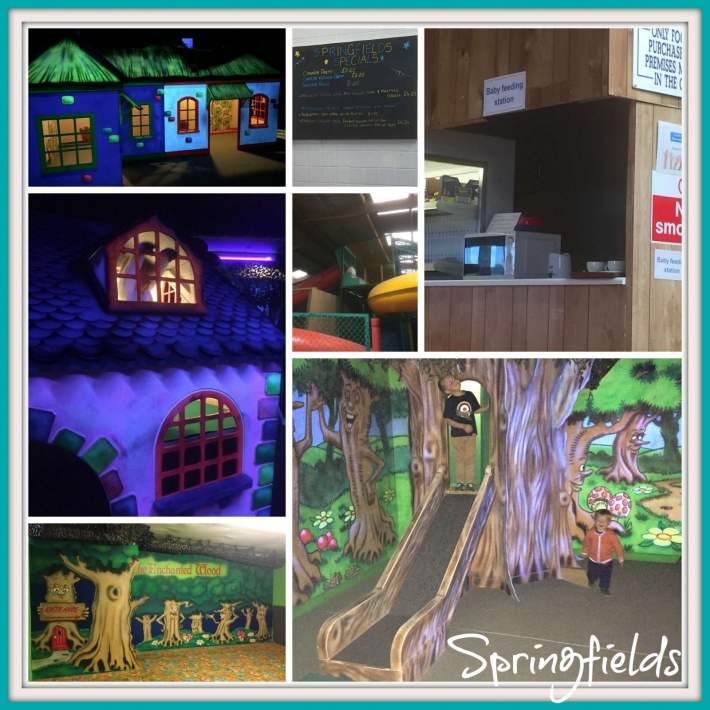 Springfield Fun Park was taken over in June 2015 and the new owners hit the ground running as it is their high season. So far they have focused their attentions on safety improvements such as the jetty around the boating lake, replacing wooden fencing and adding gated access to the boats to prevent toddlers running straight over to the water.

I was lucky enough to meet the family that own the park and they have lots of plans to improve it now the summer season has ended. Over the winter months they will be rejigging the layout of the play barn so there is a better use of space and it’s opened up and they will be installing a mini-town in with a vets, fire station, police station, bakery, houses etc and a painted road with traffic signs to drive the mini cars around. Our other ideas include a low climbing wall and to section an area off just for the little ones where no shoes can go.

Outside they are planning on replacing most of the fencing, giving everywhere a lick of paint, jazzing up the go cart track and focusing on outdoor nature pursuits such as den building and nature trails. Other ideas include a maze and they are looking to exploit the educational opportunities that exist on the site and hope to work with local community groups such as brownies, scouts, schools, pre-schools and centres for adults and children with learning disabilities.

We loved our day at Springfield Fun Park, it has a really relaxed and traditional family fun atmosphere and we hope to go back next and see all the improvements.

16 thoughts on “At Day at Springfield Fun Park, Cornwall”