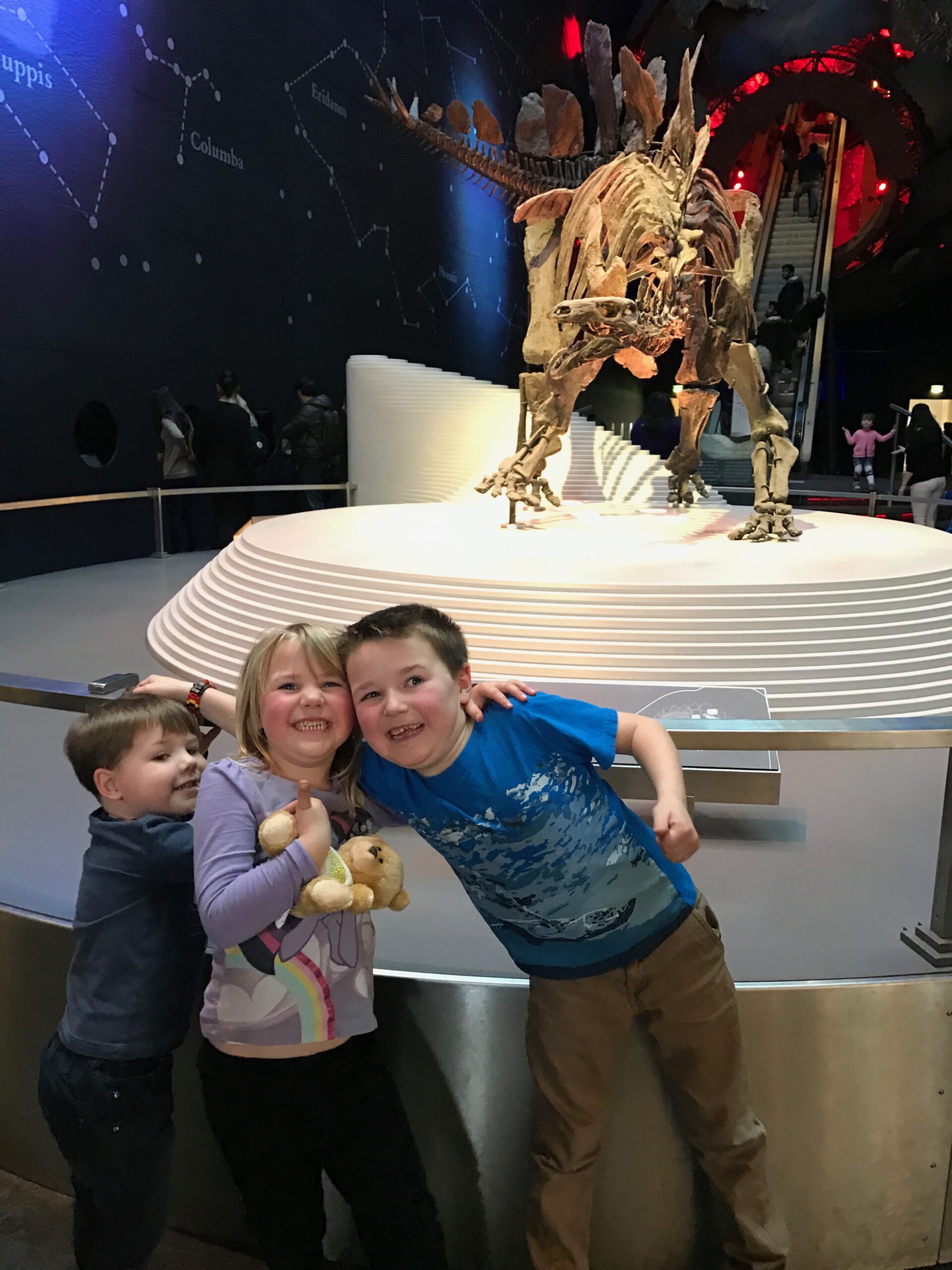 It is has been a good few years since we last visited the Natural History Museum and after enjoying a trip to the National Museum of Scotland back in February half term we decided a visit was in order.

We arrived in time for opening at 10am forgetting that there is always a huge queue at whichever entrance you choose, not great when your children announce they desperately need the loo. Thankfully the queue was relatively fast-moving and hubby shot off to the toilet with the boys whilst I had our bag checked.

Knowing that Sebby wanted to see the dinosaurs, we arrived through the new entrance keen to see what we could find and the first hall we found was the Mammals gallery, home to the humongous Blue Whale as well as extinct mammoths, the giant elk, giraffes, hippos and horses. 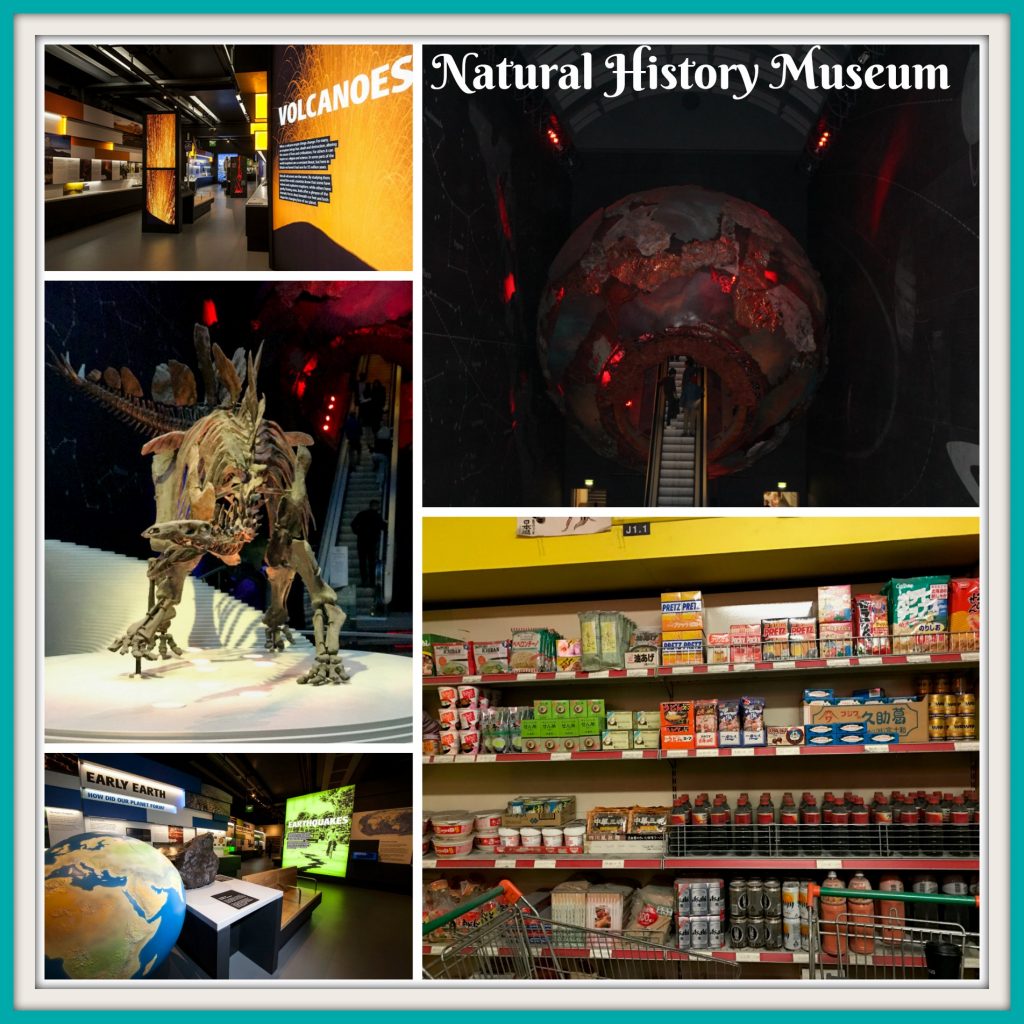 There was one and only place that Sebby wanted to find though – the dinosaurs!

I have to admit that I found much of the Natural History Museum a little on the dated side, but the dinosaur exhibit is bang up to date with electronic displays full of information about the different time periods dinosaurs lived alongside skeletons on display and a huge animatronic T-Rex. 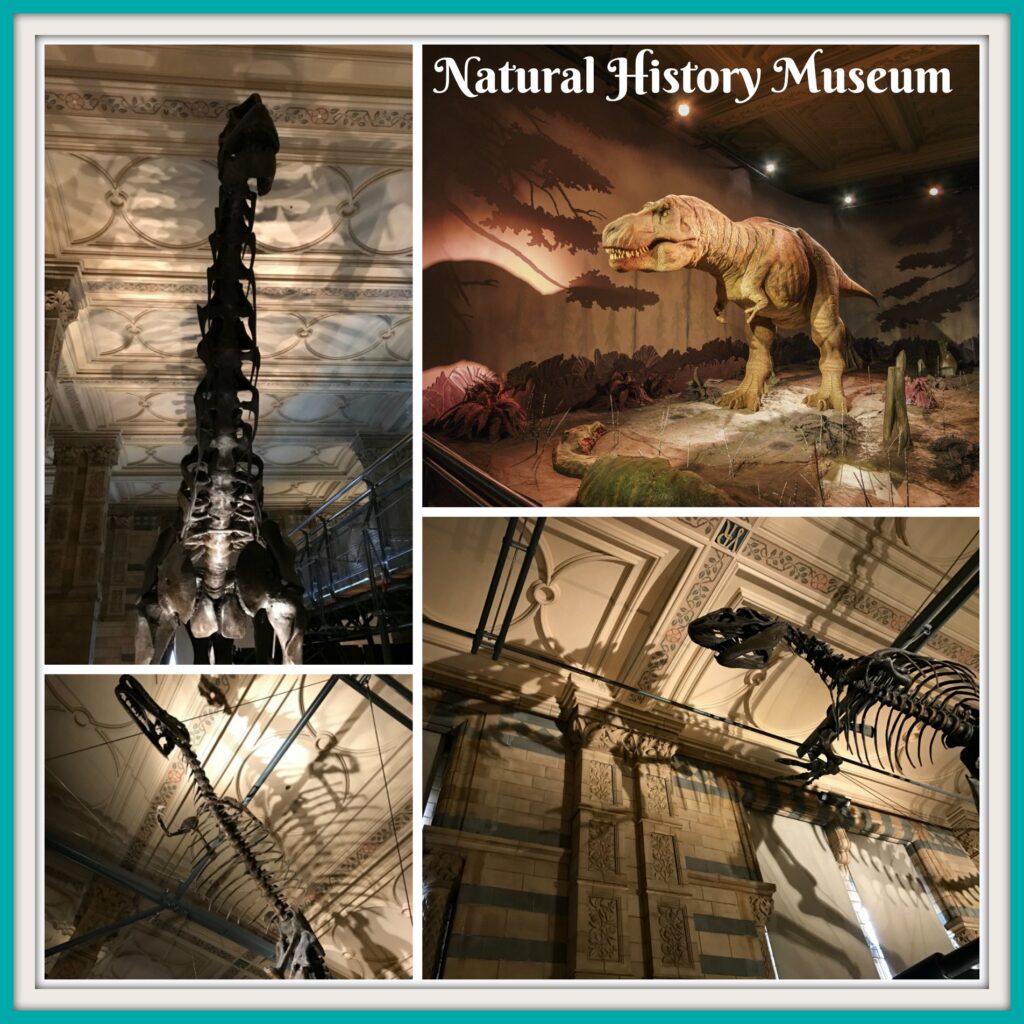 It was the way the area was lit that really sparked everyone’s imagination and the shadows of the dinosaur remains against such a magnificent building was eerie yet beautiful. 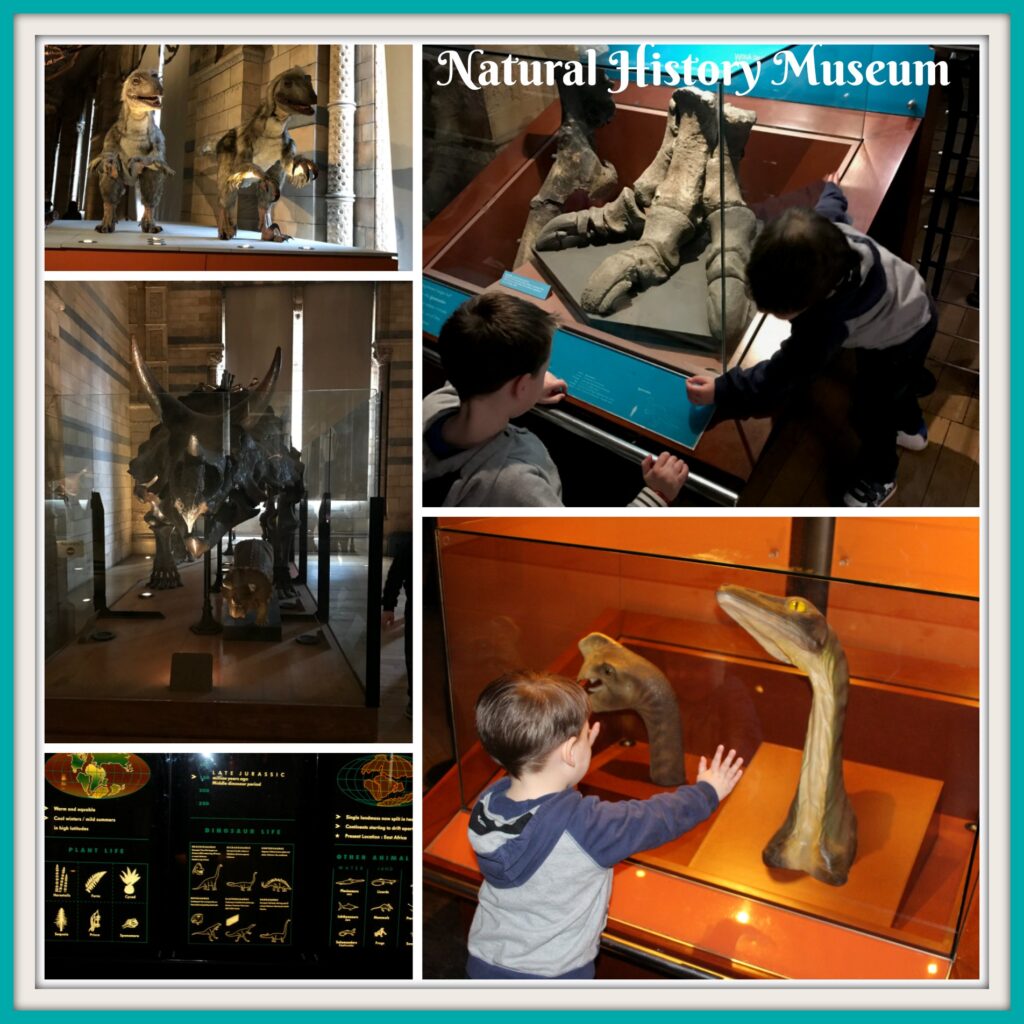 It was the displays that sorted the facts from the myths about why the dinosaurs died out that were sometimes amusing and very interesting and the boys were stupidly excited to spot fossils that had been found on the Isle of Wight, where we were the day before.

All that dinosaur hunting had certainly built up an appetite so it was time to stop for lunch and we could not resist the aptly named T-Rex Grill, with its huge mirrored images of T-Rex’s all around the restaurant and a pair of animatronic dinosaurs to welcome us inside. 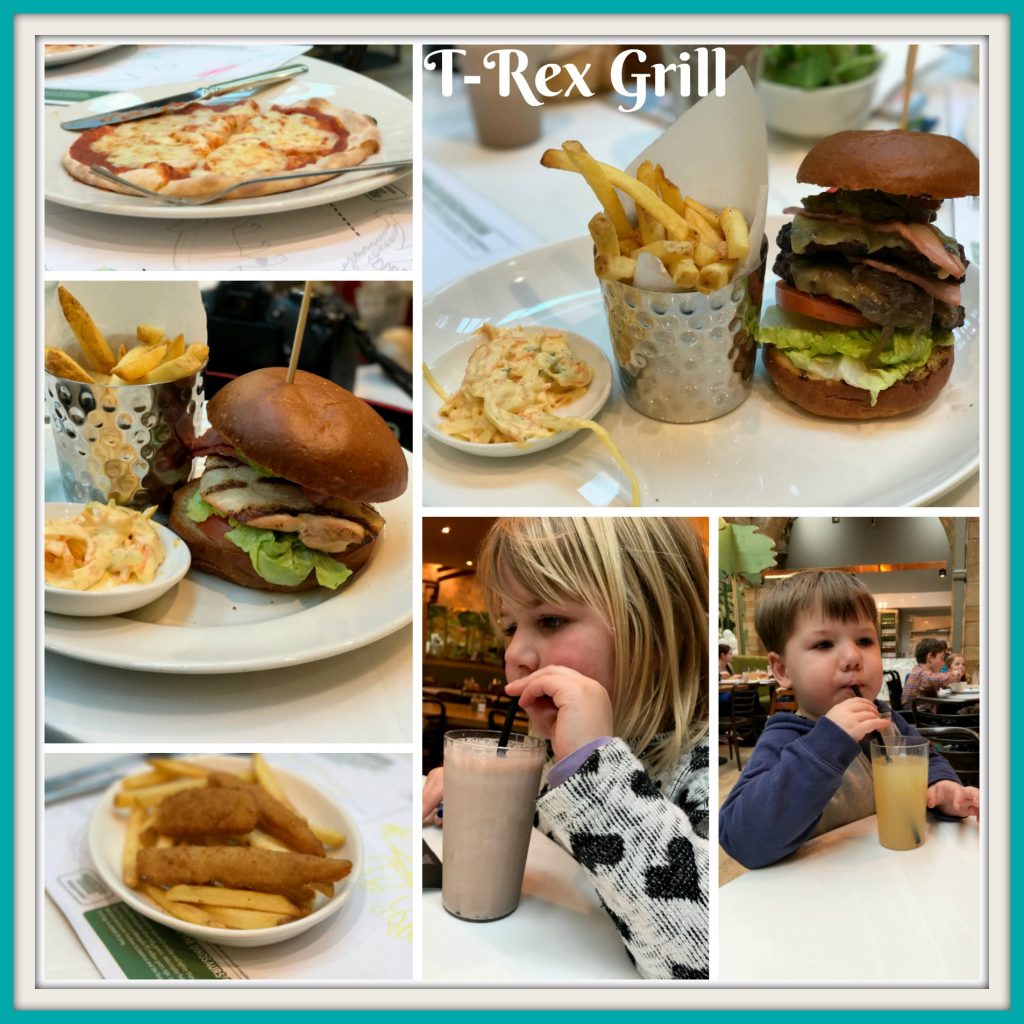 The kids immediately settled with their activity sheets which includes run dinosaur facts, jokes, colouring and the chance to win a prize by drawing their very own dinosaurs and then tweeting a picture with the hashtag #littlegrillers. The menu featured burgers, steak, pizzas and the all important puddings, perfect for explorers young and old.

Not only did the food come out super fast, but it was so much better than I expected. Hubby chose the T-Rex Burger, I went for the chicken burger and the kids played safe with pizza and fish goujons. 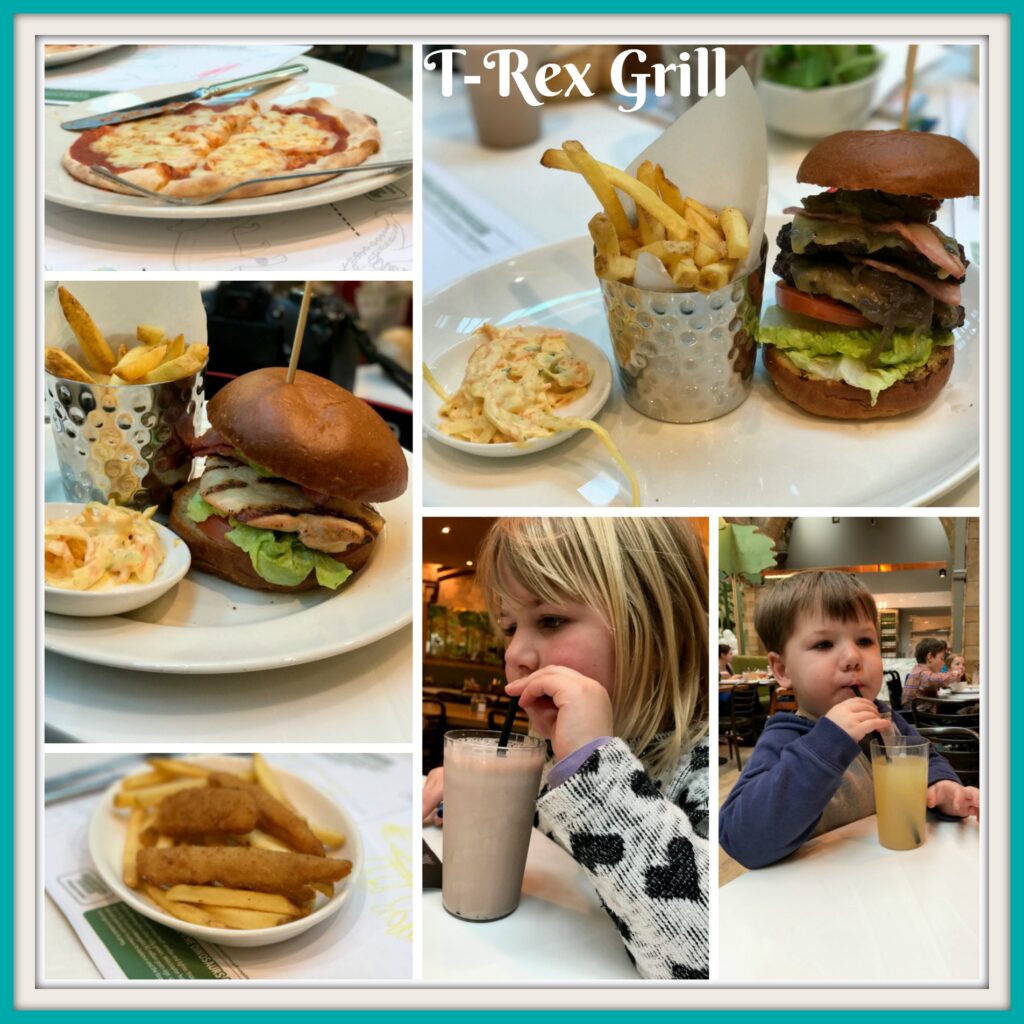 We were rather full up after that feast but with the kids getting an ice cream, complete with chocolate dinosaur as part of the meal deal, we couldn’t resist a spot of dessert either. Hubby went for Dinosaur Eggs and Ice Cream and I had the Molten Chocolate Volcano cake – Yummy!! 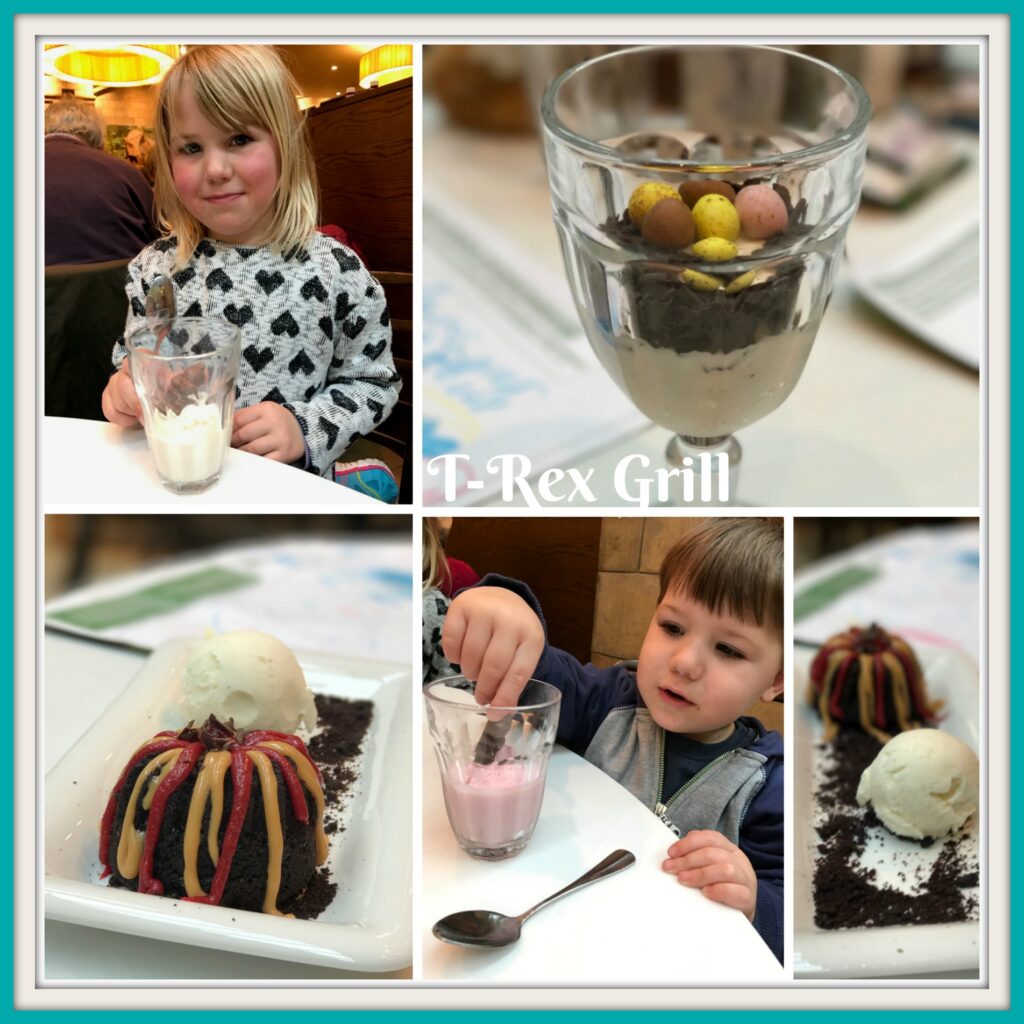 Full to bursting and with their entries safely sent into the dinosaur competition we headed back into the museum to see what else we could see.

Isaac was keen to do the Human Biology exhibition and although Hubby and I found it quite old and dated, the kids loved exploring and experimenting. They learned how senses influence perception, how our memories function, and how the brain and other organs work together. 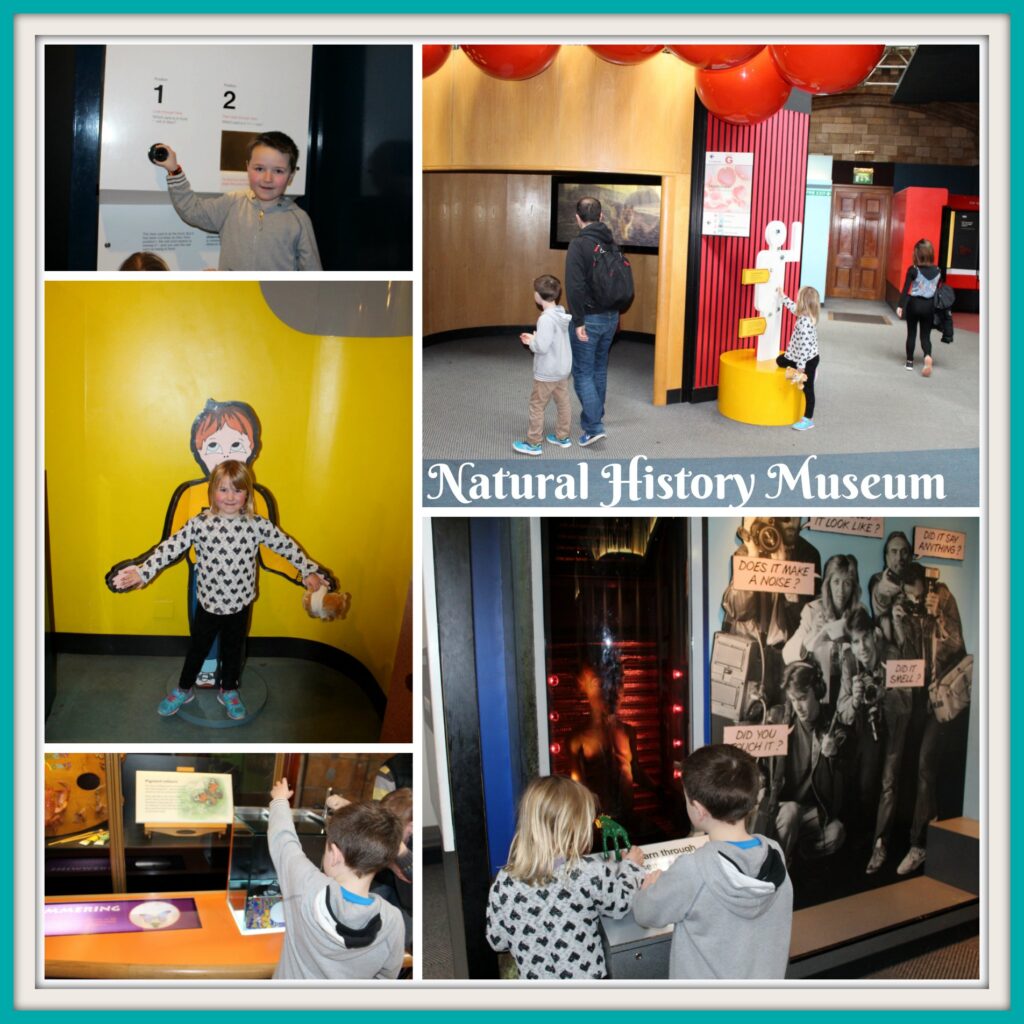 Next it was on to the insects and the mock-up kitchen made even me shudder – I don’t do creepy crawlies.

My favourite part of the museum has to be the volcanoes and earthquakes zone as you meet Sophie the Stegasaurus at the bottom of a large escalator, where you rise into a glowing red planet. The exhibits included dramatic film footage, interactive games and their famous earthquake simulator which is a fun, but slightly un-nerving experience. 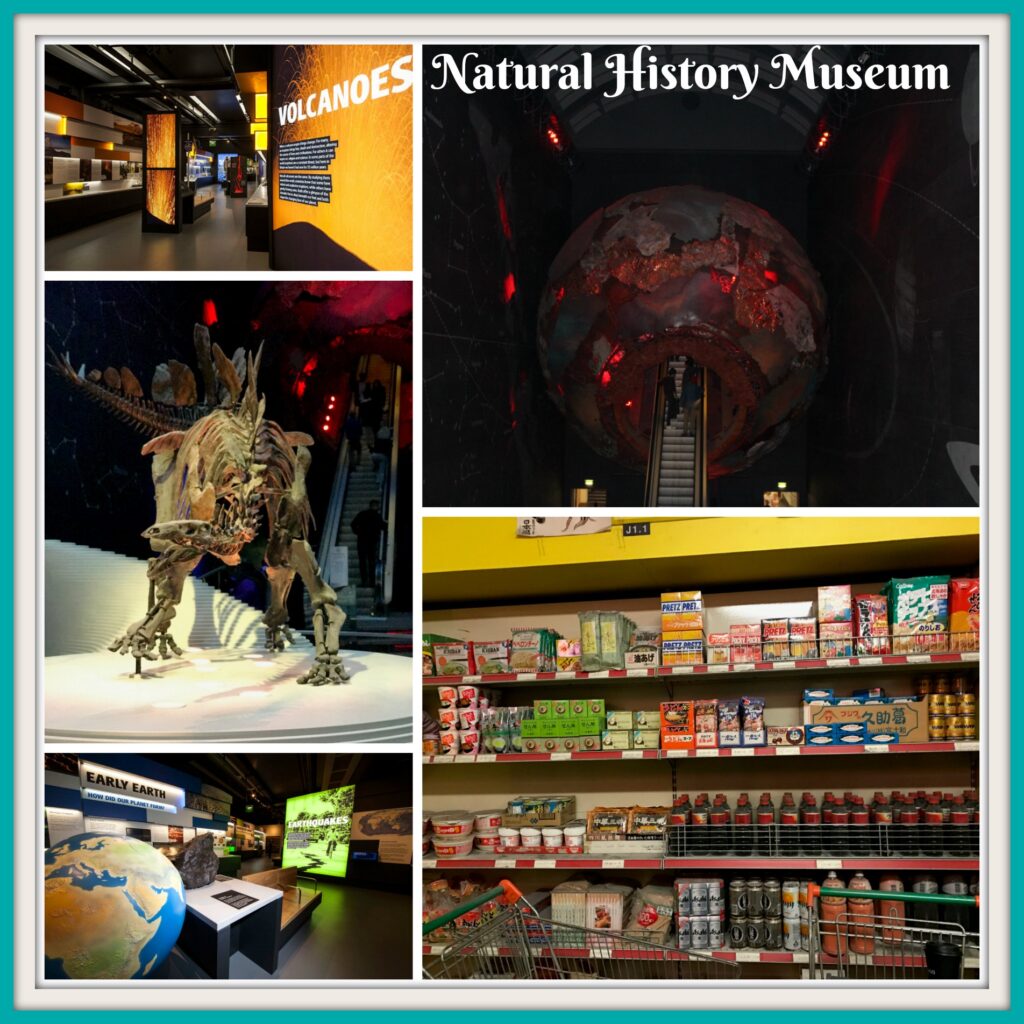 We did enjoy our visit to the Natural History Museum, however it does lack in interactive fun for the kids in some zones so didn’t hold their attention as well as it could have so we headed off to the Science Museum to see what that had to offer.

Disclaimer: We were invited to try the T-Rex Grill at the Natural History Museum and were given a free meal in return for a review. Menu prices start from £10 for adult meals and £6 for a children’s meal deal with drinks and a main course.

11 thoughts on “Finding T-Rex at the Natural History Museum”