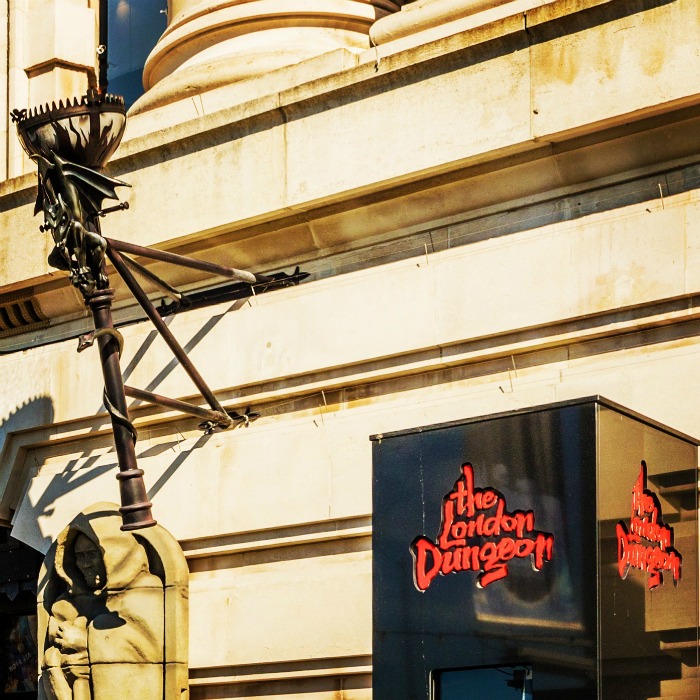 On Tuesday, Hubby and I headed up to London without the kids in tow for a London Meal and Theatre day out with Red Letter Days.

We chose to eat our meal at lunchtime to give us a bit of time to explore London and being Merlin Annual Pass holders, we decided it was the ideal time to visit the London Dungeons as it is something we cannot do with the kids with us.

Being a weekday and during school hours, we walked straight inside and had just a 10 minute wait for the next tour and being a last-minute decision, we didn’t really know what to expect, as the last time we did it was well over 10 years ago when it was still at Tooley Gate.

The new attraction is more than a third bigger and over 90 minutes delivers 1000 years of history in 18 shows performed by 20 actors with plenty of shocks and surprises and two state of the art thrill rides. 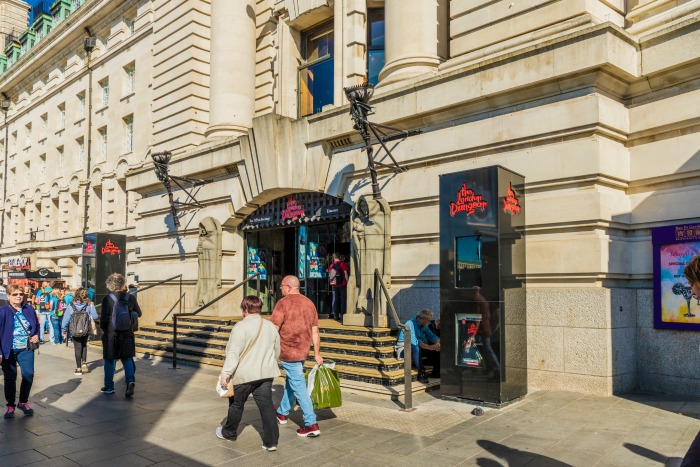 I am glad we didn’t risk taking the kids, as they were nervous enough of Shrek’s Adventure – this experience, although historical and informative, is not for the faint hearted, or those afraid of the dark………and believe me, it is pitch black in places!

Then there is the actors. They are not allowed to touch you, but they revel in playing their characters and choose people to pick on as you head through time and most of the time, you are guilty of some despicable crime. TOP TIP: Don’t hide at the back.

What is in the Dungeon?

A lift that takes you back in time to 1536, with a not so jolly jester!

The first of two rides in the experience, this flume ride sees you heading through Traitors Gate, just like Anne Boleyn. Beware: you will get wet!!

You are now in the Tower of London, where we met the Head Master who gave us a lesson on how to prepare a head for a spike.

It is a bit of a nervy walk to the Houses of Parliament, through dark, winding corridors with banging doors around you, but you are met by a cheery soldier who is celebrating capturing Guy Fawkes and foiling the gunpowder plot…….but all is not as it seems.

Poor Guy Fawkes was tortured before eventually being killed and in the torture chamber you learn all about what pain and punishment looked like in the 1600’s. Men, cross your legs!

If you are nervous of dark and confined spaces, then this one is definitely not one for you. You learn about the symptoms of the plague and see if you think you could survive forty days and forty nights in the Pest House. Beware of the escaped leeches too.

The Great Fire of London

Thankfully we survived the plague and then found ourselves in the house of Lord Mayor of London, Thomas Bludworth. He thinks the panic about the fire is all a load of PISH, but things are about to get very warm and smoky.

Mrs. Lovett is the business partner and accomplice of barber/serial killer Sweeney Todd, who makes and sells the best pies in London. But where does she get her meat from?

This is probably the scariest room in the whole Dungeon, will you be brave enough to sit in a barber’s chair and have a hair cut or a close shave?

Mary Jane Kelly updates you on the recent Whitechapel murders by a certain Jack the Ripper, with all the grisly details

The Ten Bells Pub is where Jack the Ripper’s victims once drank. Mrs Waldren, the landlady, tells you the ultimate ghost story on a stormy night.

With nerves still jangling you enter the courtroom, which is a bit of light relief……unless you are called to the dock to answer for your crimes.

The second of the two rides in the Dungeons, it is an exhilarating vertical free fall drop ride.

Somewhere to relax with your favourite tipple as you learn all about the gossip and scandal surrounding the local scoundrels, villains and working girls unravels around you. 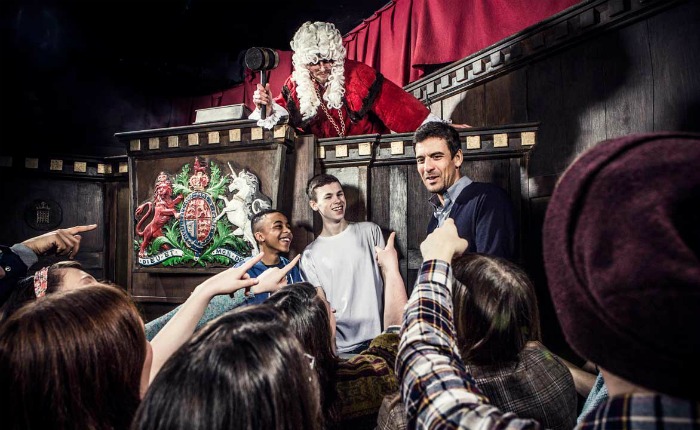 The London Dungeons whisks you way back to the capital’s most perilous past and takes about 1.5 hours to visit, although you can linger in the Tavern for longer if you choose. It’s a brilliant day out but I would not recommend for young children as, although the fear is your mind playing tricks on you with darkness, special effects, sounds and smells, it would be quite overwhelming for little ones.

I would recommend for children and adults age 12+.

Tickets for the London Dungeons cost from £21 per person, online and in advance, but I recommend you check the website for combination tickets as there are many deals for Merlin attractions online and the London Eye, Sea Life Centre and Shrek’s Adventure are all less than 5 minutes away.

16 thoughts on “Are the London Dungeons Scary?”