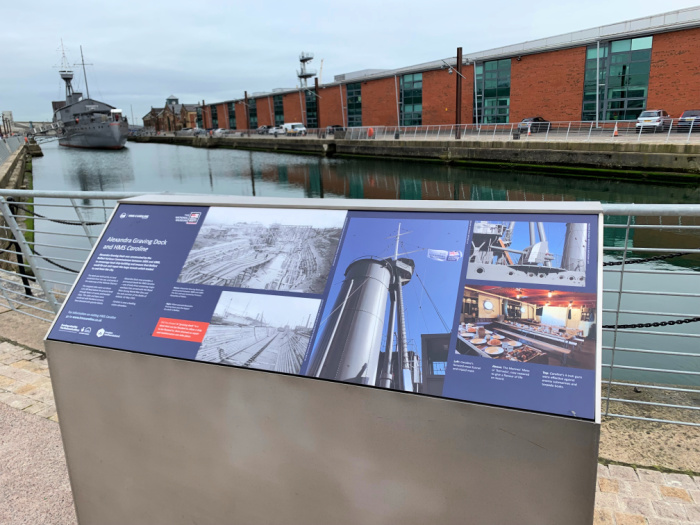 Based in Belfast’s famous Titanic Quarter, just a short walk from the Titanic Museum, HMS Caroline is a First World War-era warship now restored as a must-see floating museum with an amazing story to tell.

We are regular visitors to Portsmouth Historic Dockyard in Hampshire, which has many Naval ships to see and explore, including HMS Victory, HMS Warrior, the Mary Rose and HMS M.33 – another First World War era warship, so we were excited to see and experience what HMS Caroline had to offer.

HMS Caroline offers an interactive self-guided tour, touch screen displays and panoramic views of the harbour. Starting on land, there is a small quayside visitor centre and exhibition space dedicated to telling the personal stories of those who served on the ‘Carry’, where the kids picked up their quiz sheets and then it is time to climb onboard and explore.

The first thing you see is a dramatic short film telling the story of the ‘The Battle of Jutland’ which is projected onto the wall of the ship. The 11-minute screening follows the 36-hour Jutland engagement and shows how the battle unfolded from the decks of HMS Caroline. The film does get quite noisy, with gunfire, however it didn’t phase the kids at all.

It was exploring the ship that the kids were more keen to do.

Inside the ship, the spaces have been recreated to look as they did in September 1914, when the ship first entered service.

These spaces on HMS Caroline include the Captain’s Quarters, Marines’ Mess and Engine Rooms as well as the Sick Bay and Galley.

The kids also got to work on their trail sheets, trying to find all the LEGO figures that were hidden throughout HMS Caroline, helpfully aided by the uniformed staff onboard.

In the dining room, not only did we find a table laid out for dinner, but we also found some dressing up, with Isaac dressing as the Captain, Sebby as a shipmate whilst Eliza chose to become a mermaid!

It was the interactive elements that the kids most liked and Isaac was determined to learn how to signal with lamps, practising his technique until he managed to spell his name.

There was also the chance to try and crack codes and cyphers.

I am not sure I would trust Sebastian and Isaac to sail in a straight line after seeing their attempts on the simulator.

Isaac did seem quite accomplished at loading and firing torpedo’s.

Outside you are free to walk along the decks and see the ship’s replica 6-inch and 4-inch guns.

You can also head up to the Navigating Bridge where you can visit the Captain’s Sea Cabin.

If you want to extend your visit, you can eat onboard HMS Caroline in the Mess Deck Cafe, which offers a range of hot and cold snacks to suit all ages.

Visiting HMS Caroline is a fascinating day out for all the family. As well as the interactive exhibits, the kids loved talking to the staff onboard, finding out what life really would have been like for the men and women who served on the ship.

A family ticket for HMS Caroline costs £23 for 2 adults and up to 3 children and is valid for a year, allowing you to visit as many times as you like!!

Disclaimer: We were guests onboard HMS Caroline, all thoughts and opinions are our own

21 thoughts on “All aboard HMS Caroline”