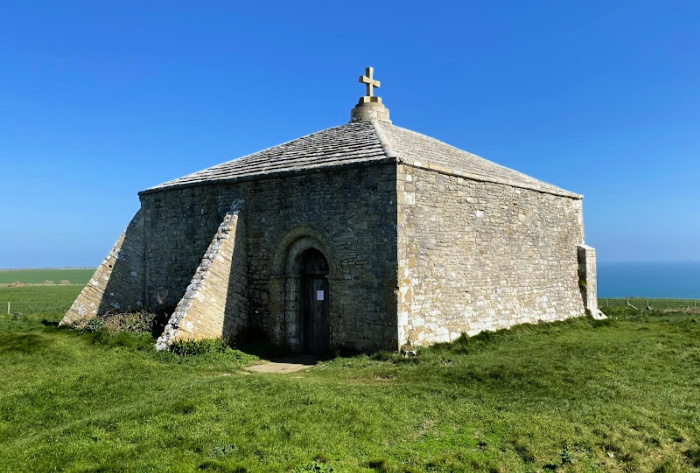 Our moods have definitely lifted since restrictions started to ease last week and although we have stuck to our county, we have explored slightly farther afield.

On Friday we headed to Lyme Regis to see my Dad, where we found out that Prince Philip has sadly passed away at the age of 99.

My Dad told us of the time he met him, when he unofficially toured a ship my dad was working on when the Royal Yacht Britannia moored alongside it.

Abbey also got to meet him when she got her Duke of Edinburgh gold award as I watched from afar. I don’t think we will ever forget that day as it was just before he retired from public duty.

The Easter bunny did well with Harry Potter inspired easter eggs for Eliza and Stormtroopers for the boys – they had quite a haul by the end of the day as we also had an easter egg hunt at home.

As the weather was so beautiful, we headed out for a walk along the southwest coast path to the disused quarry at Winspit.

The kids loved exploring the caves and old quarry buildings and we have since found out that they were used in the filming of an episode of Dr Who, so they can say they have visited Skaro, home of the Daleks.

From there we walked along the coast path to St Aldhelm’s Head, the southern most point of the Purbeck Hills and home of St Aldhelm’s Chapel, whose corners – and not its walls – face the four compass points.

On the way home, we stopped by at Nanny’s house, who had organised another easter egg hunt in the garden.

I worked Easter Monday, so the kids were home with Dad, who kept them occupied with craft activities from Pets at Home.

In the evening, we finally got around to burning all the cardboard that came with our sofa, so the kids enjoyed some camp fire songs, although we didn’t have any marshmallows.

We enjoyed another day off together, so took the kids for a local walk along the River Allen, where we spotted a grey wagtail on the river banks.

The temperature had definitely dropped from the day before and we were surprised by a brief snow shower in the afternoon.

I am classed as immunosuppressed, so got a text message to see if there was anyone in our household over the age of 18 that could get a vaccine, so we booked Kian in for his for Friday.

The kids finally gave in and started to eat the Storm Trooper and Hedwig.

We met up with Abbey in the afternoon for a walk around Christchurch – I was tempted to leave the kids in the stocks.

We stopped for a play in the park, although didn’t stay long as it got quite busy.

If you have been following the sofa saga, you will be relieved to know that they collected the wrong half today and brought the replacement – I finally have two matching sofa’s!!

The kids have been making masks for a Pets at Home competition, so we took them out for a local walk to take a picture to send in – Lilah really wasn’t impressed!!

We got a phone call in the afternoon to say that as Kian is under 30 he couldn’t have the Oxford vaccine due to the evidence linking it to rare blood clots, so his appointment was cancelled until they can source a new vaccine brand.

Now that the Easter rush is out the way, we headed out a little farther afield to visit my Dad for an outdoor walk, starting out in Lyme Regis, where we saw our first ducklings of the year.

We walked through the town, along the cobb and back to the car before heading to Charmouth to do some fossil hunting.

As the tide was coming in, we didn’t want to risk our favourite fossil hunting spot, which lies between Lyme and Charmouth, instead heading east.

We found a few ammonites, but could see the rain heading in, so will head back and spend a full day here again soon.

We got home in time for Sebby’s first face to face Beavers session since before Christmas – safe to say he was very excited and came home with an envelope full of the badges he has been earning online for me to sew on his jumper.

He only has a couple of months left before he joins Cubs!!

We live on the flight path for Bournemouth Airport and as you can imagine, it is very quiet, however, this A400 is on a training exercise here and keeps flying over.

How was your Easter?