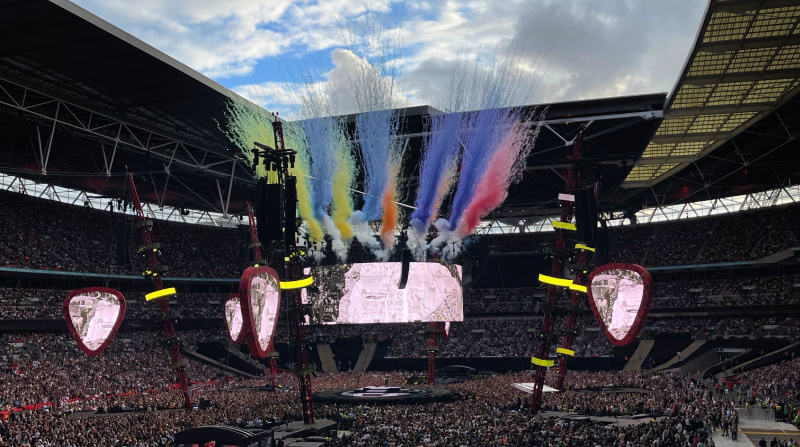 The busiest birthday week of the year, with three of us celebrating this week.

It was fairly uneventful at the beginning of the week, as we were looking forward to a weekend break in London to see Ed Sheeran

After the excitement of Sebby’s party yesterday, it was party no.2 for him as he was off to Splashdown for his friend’s birthday.

Of course, it was also Father’s Day and a roast dinner was requested for the celebratory meal.

The only thing he asked for, for his birthday was a slushie machine and Pokemon: Legends of Arceus. Thankfully I managed to find both and on offer too!

He had also requested a Percy Pig birthday cake, but sadly they have stopped making them. He was more than happy with Colin though.

My birthday, although sadly I had to work as I needed the weekend off.

In the evening, I dropped Eliza at her lifesaving club and the roads were gridlocked, so I took advantage of the setting and went for a walk whilst she trained.

We normally have a meal out to celebrate birthday’s, but because the kids had Scouts and the Lifesaving on Monday and Tuesday, today was the first day we could do it.

After a bit of a restaurant dilemma, Sebby finally settled on Pizza Hut. I think it was the ice cream factory that swung it.

Another work day and this weekend we were raising money for Help For Heroes.

Not sure my new uniform is going to take off – it was far too hot inside and I couldn’t see a thing!

Callan’s Birthday and he is the grand old age of 25. Sadly we didn’t get to see him as he was off shopping in Brighton.

In the evening, we headed to a very wet and windy New Forest to drop Eliza at Survival Camp.

It was an early start for us, as we had special tickets for a screening of Lightyear. The kids enjoyed it, but I found the plot to be a bit wishy washy.

We picked up Nanny on the way home, as we were heading to London to see Ed Sheeran at Wembley.

We stayed at The Hyatt Hotel in Whitechapel and they spoiled us rotten, with some fab patisserie items on arrival. The view from our terrace was spectacular.

We managed to squeeze in a couple of cocktails before leaving for Wembley. We had planned our tubes carefully to avoid the ones that were striking, but were caught out with three stops to spare and had to head back into London and get on another line – thankfully we arrived in plenty of time to see Maisie Peters and Ed Sheeran.

It was amazing, although part of me wished we were standing to get a better view, but thankfully there were lots of screens all around the stadium so you could see what was happening.