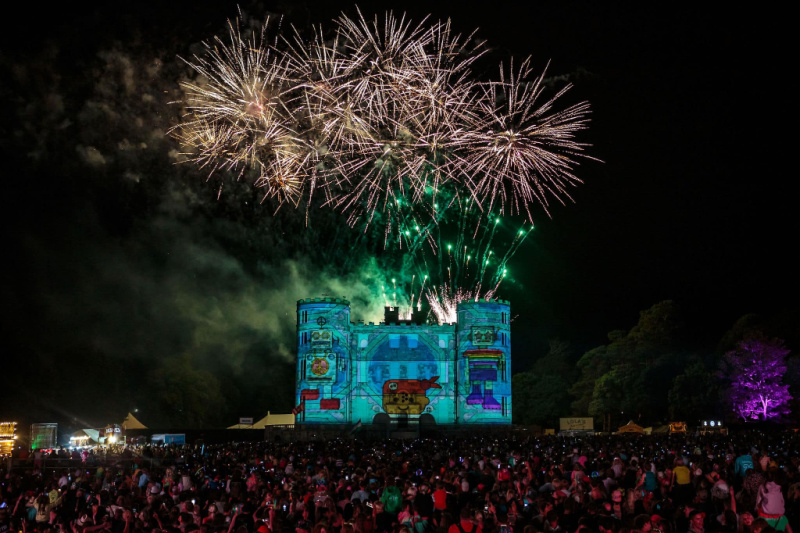 Camp Bestival is 14 years old this year and we have been visiting for 9 of those (it would have been 10, but COVID put pay to that).

We have always enjoyed Camp Bestival, even when the weather hasn’t played ball, but this year the festival was back to its very best and more colourful than ever!

We had small children for our first few Camp Bestival experiences (Sebby was 6 weeks old for our first). Now he is 9, Eliza is 11 and Isaac 14, so gone are the days of getting to the main stage early for Mister Maker, Mr Tumble or other CBeebies favourites. Judging by the crowds when we arrived at the end of set, in time from Brainiac Live, he is still as popular as ever.

Camp Bestival offers a great mix of entertainment for all ages, with plenty of areas for the kids to cool off and let of steam away from the crowds, with Lizzie’s Way, the Dingly Dell and the Spinney Hollow Craft Village.

The Dingly Dell has grown this year, with the introduction of Rimski’s Yard, a place which produces magical moments and an area for younger kids to relax and play.

We have also got more out of the literary tent this year, as the kids have got more into their books and have favourite authors and illustrators.

Eliza and Sebby got their Horrible Histories books signed by their illustrator Martin Brown and Eliza got to watch a talk and meet her favourite author, Katie Kirby, of Hurrah for Gin fame.

Here is what we thought about our weekend at Camp Bestival:

The kids highlights have always been the shows and this year they didn’t disappoint.

The Terrible Tudors made us laugh and cringe in equal measure, as we learned all about their torturing ways and how terrible they actually were.

Brainiac Live was brilliant fun, with daredevil stunts and all the experiments you’re not allowed to do at home. It does feature loud bangs, so ear defenders are recommended for young, or sensitive children.

We have loved Dick & Dom for years and have seen various sets from these children’s favourites. At this years Camp Bestival, they did their DJ battle and the crowd went wild!

Always a favourite in Caravanserai, they have become centre stage, performing with the world’s largest Disco Ball, suspended from a giant crane.

There were LED lights, dancing, acrobatics, fireworks, and confetti, all performing to a fantastic music set in the Magic Meadow. They perform Friday and Saturday night if you are heading to Shropshire.

The Lower Kids Garden is still packed full of fun things to do with the kids, but it is worth noting that many of these are now pay extra for.

Free activities include the science tent, which had the Primary school engineering area, Creative Station art studio and a LEGO area, where kids could design their own LEGO City.

The Circus Skills area and giant sandpit were also there, as well as a new tent by Circus Raj. Inside, you can try on traditional Indian clothing, try your hand at ink printing or making a bucket hat and even get a henna tattoo. It is worth noting, that you need to turn up in the morning to ensure you get booked onto the workshops later that day, but the kids loved it.

Eliza and I got matching henna tattoos, which were much better than the paid for ones on the paying stalls outside.

The printing was also free, although you can pay extra to print and take home a tote bag.

We tried to book on to the Trapeze again this year, but sadly missed out, but you can watch others learning their craft and the odd show from the professionals. Other things to enjoy in the Kids Lower Garden are the shows.

These include Extreme Bike Battle, the Science Shows, Greatest Tent on Earth and the new Farmyard Circus.

With the cost of living crisis, many of the charities visiting provide fun activities, but ask for a nominal donation for these to help pay for the materials. The kids really enjoyed polishing ammonites with the Jurassic Coast Trust and making their very own rockets and launching them, with Mission to Mars.

You will also find the World’s Largest Bouncy Castle and various fairground rides in the Lower Kids Garden.

The food has always been good, especially at the Feast Collective and we enjoyed some lovely meals.

DJ BBQ was a particular highlight as he really got the party started and had the kids doing a dance off to win merchandise, which distracted them from the wait for their food. It wouldn’t be Camp Bestival without our festival favourite; Corn on the Cob!

Although there is lots to keep the family entertained, Camp Bestival is first and foremost a music festival. As the kids have got older they have been more appreciative of the music and now actively want to choose the acts they want to see themselves and Eliza was most looking forward to seeing Rag n Bone Man, the Friday headliner.

Razorlight were also good, but it was Jo Whiley, who was on before him that whipped the crowd, including us, into a frenzy with a whole host of dance classics.

For me, Saturday night was all about Sophie Ellis Bextor, who brought her kitchen disco (and kids) to Camp Bestival, with a mix of her hits and some modern classics.

We missed Kool and the Gang as headed off to see the Disco Inferno show. I then took the younger kids back to the tent, whilst my husband took Isaac to Dick N Dom’s massive rave.

We were looking forward to Sunday, to see Shed Seven, who had previously been rained off in 2018, choosing to go and play a local pub when they shut the festival site down due to the weather.

Isaac was most looking forward to Example, who was fabulous, although he did drop a few too many “F” bombs for a family festival.

I wasn’t sure about Rudimental as a headline act, but the teenagers seemed to like them and I did know a good few of their tracks.

And finally, the fireworks round the festival off beautifully, with projected images on the castle alongside singalong music.

Don’t worry if you missed out this time, Camp Bestival Shropshire is coming to Weston Park on 18th-21st August and there are some tickets still available.

I have to say, their line up is even better than the Dorset one and I am jealous that we have a family wedding that weekend, as I’d have been there like a shot!!

Have you been to Camp Bestival before?

Disclaimer: We were invited to attend Camp Bestival for the purpose of a review. All thoughts and opinions are our own