Hubby and I don’t get out much – in fact it is a rarity if I am honest, but when we do we have a couple of favourite restaurants that are fairly local to us.

On Tuesday night, we were invited out for a meal at The Print Room – Bournemouth.  Having not been there since my birthday in 2010 I was pleased to see it had not changed, apart from some new furniture, as the building is absolutely stunning. 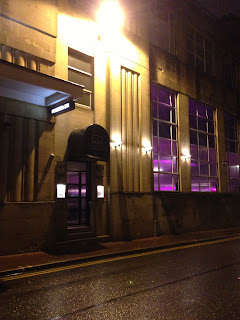 Designed as a beacon of hope emerging from the Great Depression, the majestic Echo building anchor’s Bournemouth’s Town Centre.  Constructed at great cost in 1932 and bursting with original Art Deco features, it is home to a truly unique Brasserie, Grand Cafe and Bar.

The Print Room restaurant is set in the former Press Room, once a loud and bustling hive of activity with hot metal printing presses and the daily news thundering onto hundreds of miles of paper.

We were lead to one of the dining booths which was decorated with framed excerpts from the papers from the 1920’s. 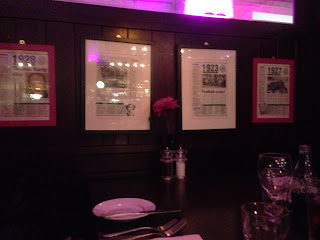 From there we could take in the beauty of the building and its decoration.  The lighting was just right – light enough to see what we were eating (and each other), but not too bright. 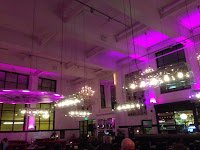 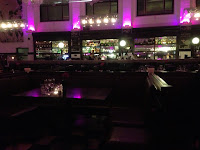 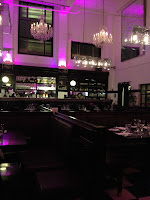 It was fairly quiet when we got there, but we were surprised how quickly it filled up for a Tuesday night.  There was a real mix of people there from young, to old, from large groups and couples.  The Print Room has a real sociable feel without being too noisy.  Ambient music played in the background and they even had a giant screen playing (silently) the original version of Charlie and the Chocolate factory. 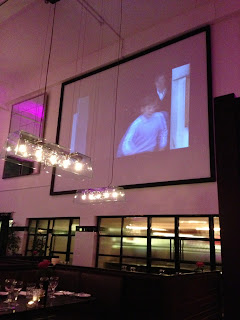 Our waiter was Jordan, who was polite and courteous.  He gave us time to peruse the menu’s and when he took our order and I was surprised by how quickly it came.  I decided against a starter as I can never manage three courses, but hubby chose soup of the day – Onion Soup, which was delicious, however the bread rolls were a little dry. 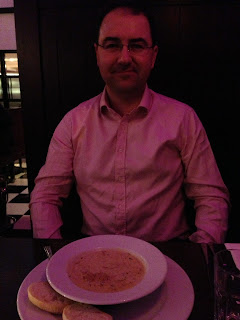 Next up was the main course.  Hubby, a creature of habit chose the Chargrilled 8oz Sirloin Steak with Tomatoes, Flat Mushrooms and hand cut Chips and a peppercorn sauce: 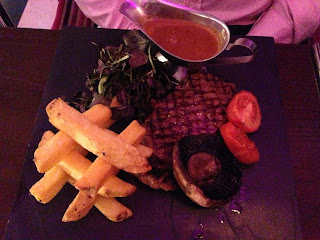 whereas I went for one of the specials – Roasted Pork Chop on a bed of spinach with Asparagus and Potato Croquettes with a mustard and cider sauce. 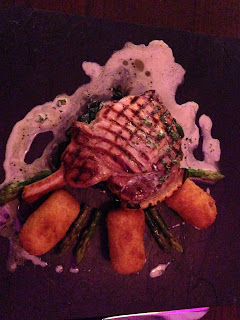 As you can see, both meals were stunningly presented on slates and absolutely delicious.  We both enjoyed our meals and hubby’s only complaint was that his Pepper Sauce was too smooth (he prefers the added crunch of whole peppercorns).

After we had finished, we were given the dessert menu’s.  Hubby decided straight away, but oh my word – what a selection.  I was toying with a couple of options, so decided to ask the waiter, Jordan, what he recommended.  He advised that the Toffee Apple and Honeycomb cheesecake was the one to try, so we did. 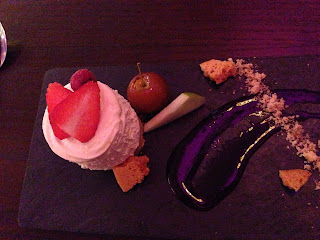 Yes, it tasted as good as it looks!!  Hubby described it as “Perfection!”.  The cheesecake itself was plain with a crunchy biscuit base, adorned with fresh strawberry and raspberry.  There was a miniature toffee apple, fresh apple, honeycomb and a toffee sauce.  I don’t think I will ever be able to eat cheesecake again without comparing it to this!.

I can highly recommend The Print Room and can assure you we won’t be waiting so long to go back.

For more information and offers you can follow them on twitter @ThePrintRoom and Like them on Facebook, where you can also help them decide on the upcoming Spring menu.  There is also more information on special events, including live music ,the Valentines Menu and more.

Thank you to The Print Room team – we had a fantastic evening!

1 thought on “The Print Room – Bournemouth”