I hadn’t been to Upton Country Park in years (apart from a Craft Show), so when I saw they were advertising a new playtrail in Half Term, I just had to check it out.

It was a freezing cold day, but I wrapped the kids up warmly and off we set.  It only takes about 15 minutes to get there from my house so we were all excited that we would have a playtrail much closer to home.

The first thing to report is that was free parking – always a bonus, however there was no signage which directed you to the playtrail so we ended up wandering around the grounds of Upton House and squelching in the mud! 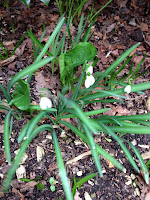 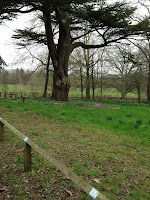 and carried on our search for adventure! 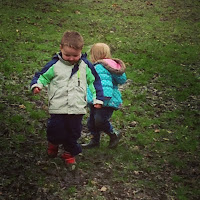 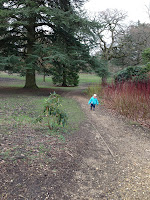 We soon stumbled across the education centre and realised we had been walking around the wrong side of the park.  The first pieces of the Playtrail were just behind it.

Isaac just about managed to climb on this one, but Eliza had to be lifted and there was a big hole in the middle, so I was paranoid she was going to fall through it, as there were lots of big kids charging around! 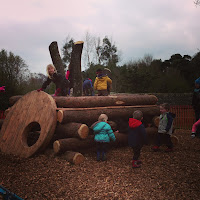 Next up was a tunnel which had been dug out from tree stump and the workmen you can see was still hammering in nails!! 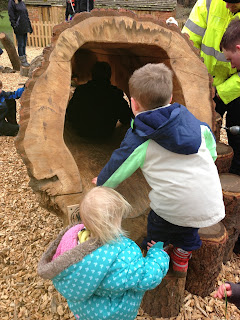 Lots of the area was still cordoned off with orange barriers, but there didn’t look like there was anymore play equipment.  I asked the workmen for directions for the rest of the equipment and we headed off.
It was quite a hike to the woods where the rest of the playtrail was apparently situated, but the kids had fun crunching in leaves and picking up sticks and we were rather excited when we saw these.
I have to admit that we were very disappointed by what we found, and many of the other visitors felt the same way.
I was expecting to see equipment similar to that found at Moors Valley, but in reality nothing was suitable for under 8’s – not great when you have two 2 year olds and a 4 year old with you – even the 10 year old was disappointed!  What equipment there was, was tiny and could only accommodate a couple of children at a time and it was so spaced out and not signposted that you had no idea which direction or path you should be going. 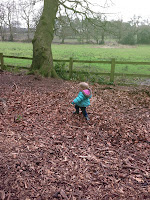 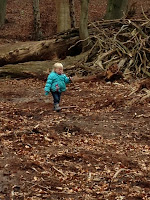 We did find a den made from sticks, but I am not sure if it was part of the trail as it certainly didn’t look secure. 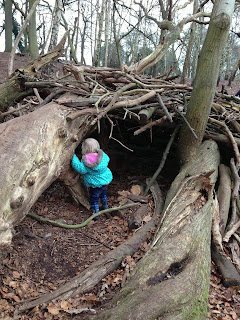 Isaac was more keen on climbing a fallen tree and running down the hill! 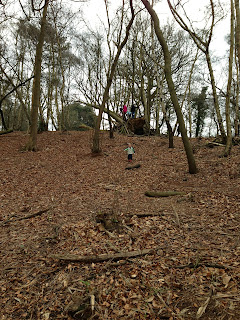 The only play equipment we found were these: 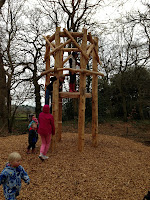 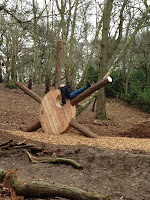 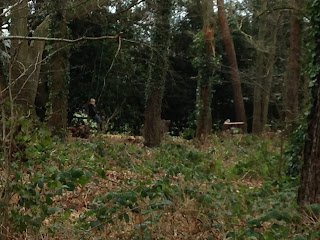 The pathways were very, very muddy and boggy in places which you would expect this time of year which made pushing a buggy through very hard going.

That said, the children mostly enjoyed it but more because they got to run around in the woods rather than play on any equipment, but we didn’t stay too long as it was absolutely freezing!

I will be going to Upton Park again, when it gets warmer as apparently there is a great water play area in the Gardens in the summer months and I am intrigued as to what the Education Centre offers, but unless you have big kids – the play trail is no good!!