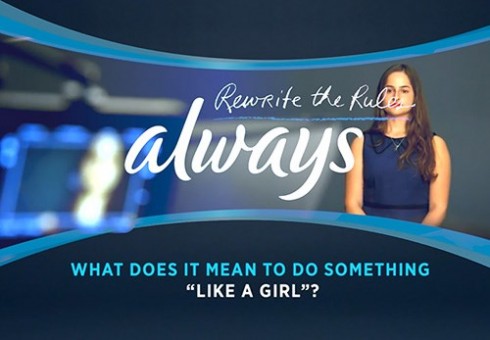 “Girls can’t be brave” and “girls aren’t strong” are limiting phrases seemingly from a bygone era, but a new Always social experiment reveals that many girls today feel limited by society’s expectations of women. In fact, data from the most recent Always Confidence & Puberty Survey, shows that 66 percent of girls feel held back by society, which they believe dictates what they should, and shouldn’t do.

Always, the global leading feminine care brand, has announcied the launch of its latest online video entitled “Always #LikeAGirl Unstoppable.” which highlights how society’s expectations have a profound impact on girls’ confidence, especially when they enter puberty. Girls and women of varying ages and backgrounds were asked if they were ever told they should or shouldn’t do something because they’re a girl.

With the new “Always Unstoppable #LikeAGirl” video comes the next phase of the Always #LikeAGirl campaign: the creation of the Always Global Confidence Teaching Curriculum, a program that will benefit millions of girls around the world. The new confidence teaching curriculum, incorporating the latest research on confidence building, is being co-developed by Always, education thought leaders and experts. The confidence curriculum will be added to Always’ existing Puberty Education Programme, building on their existing 30 years of experience of puberty education in schools and reaching up to 20 million girls in 65 countries per year.

Additionally, TED, the non-profit organisation devoted to spreading ideas, has committed to support Always in teaching confidence to young girls. In this first-of-its-kind partnership, Always and TED will develop and spread confidence-inspiring content through TED-Ed, a leading educational platform spreading lessons worth sharing.

“In the spirit of TED’s mission, ideas worth spreading, we are partnering with the #LikeAGirl campaign to reach young girls at a critical stage in their lives,” said Stephanie Lo, TED-Ed Programs Director at TED. “We’re excited to work with Always on developing engaging educational content to help girls around the world maintain confidence through puberty and beyond.”

The new #LikeAGirl video and confidence education efforts was unveiled during a series of nine Always #LikeAGirl Confidence Summits being held around the world in twenty four hours, including London. The New York Summit features a keynote address from international teen actress and female empowerment advocate Maisie Williams, the 18-year-old star who plays Arya Stark on HBO’s Game of Thrones. Williams serves as an inspiring role model to girls everywhere and has joined Always to spread the word about the #LikeAGirl mission.

“I believe it’s important for young women to feel supported and motivated to pursue their passions,” says Game of Thrones star Maisie Williams. “I applaud the work that Always is doing and am proud to join them in empowering girls to be confident and unstoppable #LikeAGirl.”

As part of its mission to stop the drop in confidence girls experience at puberty in the UK, Always recruited a panel of experts to take part in the Always #LikeAGirl Confidence Summit in London;  this included Laverne Antrobus, one of the UK’s leading confidence experts, Jenny Smith, popular Head Teacher from Channel 4’s Educating the East End documentary; and the inspirational Sarah Sobka, who at just 17 became the UK’s Young Scientist of the Year, having presented a new form of treatment for Cystic Fibrosis, smashing societal expectations that girls “aren’t good at science”.

The panellists all agree that it is time to take a stand to sustain girl’s confidence in puberty, and beyond.

Jenny Smith says, “at my school, Frederick Bremer, we believe every child has the potential to do or be whatever he or she wants, and we have a responsibility as educators to help every child fulfil their potential. This also applies to confidence. The Always #LikeaGirl Unstoppable video, as well as the new Always Confidence Curriculum, will help remove those limiting societal expectations and help sustain girl’s confidence during puberty and beyond.”

17 year old Sarah Sobka explains; “No girl should feel she can’t do something because of her gender. Whether it’s playing a piano or being good at science, girls should have the confidence and self-belief to do anything and everything they want. As a young girl interested in a career within the field of science, I understand why girls wouldn’t feel comfortable doing a particular activity that society ascribes as typically “male”.  I believe it’s time to take a stand, I hope I can help Always inspire other young girl’s to be unstoppable #LikeaGirl.”

“You would expect that girls believe things will get better but, in fact, our latest research shows that three in five girls think that in 10 years there will be the same or even more limitations for young girls,” said Roisin Donnelly, mother to three teenage girls and Brand Director, Northern Europe at Procter & Gamble. “This surprising statistic is a wake-up call for all of us to encourage girls to smash any limitations that hold them back, and I feel passionately that my three girls, and all girls in their generation should feel unstoppable, and not have any barriers because of their gender.”

Always is inviting girls and women everywhere to join the movement to smash limitations and to proudly share how they are unstoppable #LikeAGirl. Take a picture, shoot a video or send a message using the hashtag #LikeAGirl to take a stand and show young girls everywhere that girls can do anything and everything!

The Always #LikeAGirl movement is being fuelled by the millions of girls around the world who are making #LikeAGirlmean amazing things. The Always #LikeAGirl campaign launched in June 2014 was inspired by the insight that the start of puberty and the first period mark the lowest moment in confidence for girls and how harmful words can add to that drop in confidence. It demonstrated the profound effect the phrase “like a girl” can have on girls’ self-confidence and it inspired a movement, which has started to change public perception: after seeing the #LikeAGirl video, most people (76 percent of women ages 16 to 24 and 59 percent of men) said the video changed their perception of the phrase “like a girl,”* according to the Always Puberty & Confidence Wave II Study. For more information about the #LikeAGirl movement, visit Always.com.