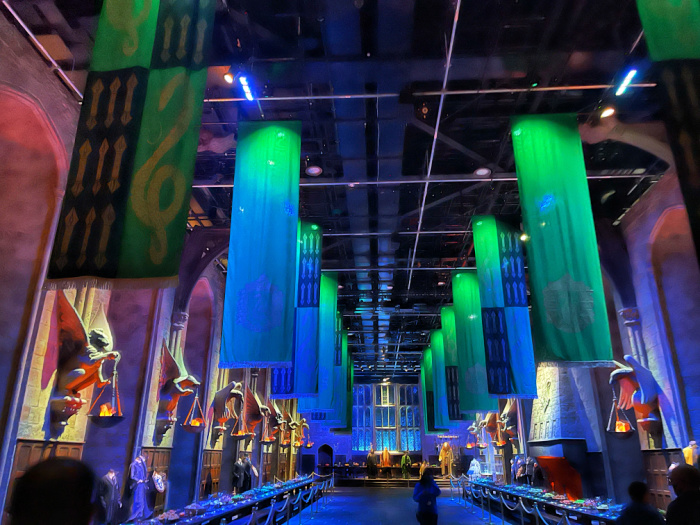 We have visited Warner Bros. Studio Tour a number of times, but when the kids were much younger.

Now they are older, they are serious Harry Potter fans, having devoured the books and watched the films several times and have been asking to visit since Eliza’s 9th birthday (she is nearly 11).

We were invited to review the Celebration of Slytherin At Warner Bros. Studio Tour London, where you can discover the Slytherin common room for the first time ever.

It was excitement overload as we arrived and donned our robes, before heading inside.

We worked out that it had actually been 5 years since our last visit and it has changed substantially. The entrance hall is now huge, with a huge Hungarian Horntail now dominating the room.

We collected our passports and then joined the short queue into tour entrance, where you follow a path past various characters and Harry’s cupboard under the stairs.

As most of the tour is inside, you are required to wear a mask for the safety of other visitors and we found everyone was really respectful of this and kept their distance, even when queuing.

As you enter through the Great Hall doors, you are greeted by a sea of green as the Slytherin house banners from the film series are suspended from the enchanted ceiling, denoting a Slytherin victory of the House Cup.

The Great Hall is the only area of the tour where you can’t stay too long, as the next group will be following on, but there is plenty of time to admire the set up and the costumes.

From the Great Hall, you can then explore the tour at your leisure, collect stamps in your passports and even find some hidden golden snitch around the sets.

Alongside the Gryffindor dormitory and common room, now stands the Slytherin common room, where you can discover its secrets up close.

It is a truly magnificent set and the staff members were on hand to point out things we would have otherwise missed and revealed some hidden secrets.

Other new additions to the tour, are interactive computer screens, where you can discover the secrets of the Marauders Map.

Paying homage to some of Slytherin’s most esteemed witches and wizards, a number of original costumes belonging to the Malfoy family are also display, including Malfoy’s quidditch robes.

The kids could also try their hand at controlling a broomstick, with the simple command of “UP”.

Our longest queue of the day was for the green screen area, where we got to have our own wanted poster made and make a video of us riding broomsticks.

This part of the tour is pay extra and I have to admit that it isn’t cheap, but the kids loved seeing themselves flying over Hogwarts.

One place that Eliza wants to visit is the Ministry of Magic and although the sets are quite small, compared to others, Eliza loved seeing Dolores Umbridge pink office and costumes.

Another highlight of the visit was wand training, which sees you learning a series of spells, before using them all together at the end of the session.

From here, we were very excited to find the entrance to the Forbidden Forest, something we had not witnessed before.

The Forbidden Forest is home to an abundance of creatures, offering shelter and protection to Hippogriffs and Acromantula among many others.

If you are nervous of the dark, or spiders, you can take a shortcut past it, but if you are brave enough, press the button and watch as the Acromantula appear from all around you, or cast your own patronus charm.

From the Forbidden Forest, it was then onto the much more friendly Platform 9¾.

You can then walk through the old carriages and see some of your favourite scenes laid out in front of you. You can also ride on a carriage with a green screen image, but beware of the dementors!

This is about the halfway point and there is a chance to stop and enjoy some lunch at the Backlot Cafe, which also serves Butterbeer and Butterbeer Ice Cream.

You can relax inside, or enjoy the picnic area outside, with views of the nightbus, 4 Privet Drive, Godric’s Hollow and the exterior walkway of Hogwarts.

Continuing the tour, we headed back inside to the creature effects area, where we learned how they animated the creatures. Sebby particularly enjoyed making Dobby dance and move.

Gringotts Wizarding Bank played an important role in the Harry Potter film series and was another new to us area of the tour.

It was a real “WOW” moment as we rounded the corner and saw the towering marble pillars and three magnificent crystal chandeliers in the banking hall.

Once through the banking hall of Gringotts, enter the depths of the Lestrange Vault used to store the treasures of Bellatrix Lestrange including the Sword of Gryffindor and Helga Hufflepuff’s Cup, one of Voldemort’s many Horcruxes.

Possibly even more impressive, was Gringotts being destroyed by a dragon in the next area, using smoke and special effects.

Gringotts is set in Diagon Alley, so naturally you move to this most famous of streets, with the kids keen to head to Sugar Plum’s Sweet Shop to see what was on offer.

At the end of Diagon Alley you enter a walkway filled with artwork and models that were used as templates for the film before entering a large hall and finding a huge scale model of Hogwarts.

Even though I have seen it before it still gave me goosebumps and I adore the way they alternate it between day and night – there is something even more magical about Hogwarts all lit up at night.

As you walk down and around the school, there are lots of interactive screens where you can learn about each area of Hogwarts and how they create their special effects.

You exit the tour through Olivanders wand shop, where everyone who worked on the Harry Potter films has their own wand box. Eliza was over-the-moon to find the boxes of the main characters, as well as Nat Tena, who plays Nymphadora Tonks.

It is then into the shop, which is full to the brim with goodies from the entire franchise. Be aware, if the kids are taking birthday money, that they don’t currently accept cash payments, so you will need to pay by card.

The Celebration of Slytherin event goes on until 15th September Warner Bros. Studio Tour London’s Celebration of Slytherin feature until 15th September 2021 and all additions are included in the ticket price. They recommend a minimum of 3 hours to enjoy a visit, but we were there for almost 6 hours. Beware, magical creatures may come home with you too.

Disclaimer: We were guests of Warner Bros Studio Tour. All thoughts and opinions are our own.