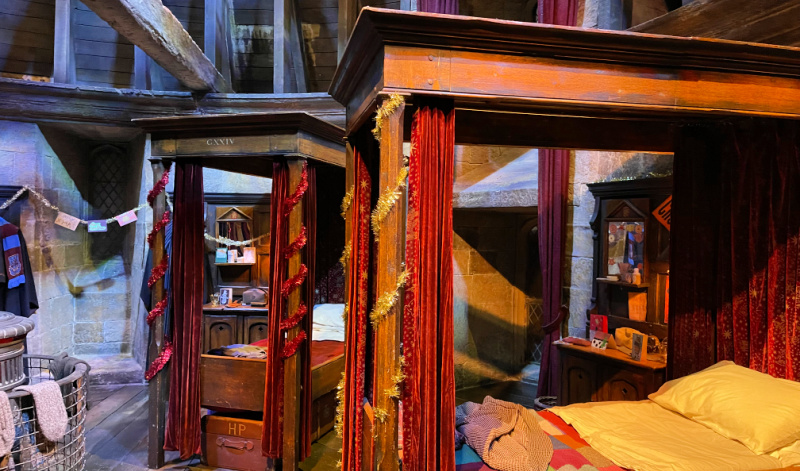 Regular readers of my blog will know that the whole family has a slight obsession with Harry Potter, both the books and the films, so when we were invited to visit Warner Bros Studio Tour for the launch of Hogwarts in the Snow, it was excitement overload.

We last visited Warner Bros Studio Tour back in August, so were excited to see how they were going to transform it into a magical winter wonderland.

We travelled up from Dorset just as storm Arwen hit and we treated to actual real life snow as we drove along the M3, just to make the day even more magical.

The first sign that things were even more special than a normal visit is the huge Christmas trees that greet you, both inside and outside the building.

It doesn’t matter how often we visit, the enchanting Great Hall always draws a gasp as the doors are opened and until 15th January, will be dressed for the Christmas celebrations with wreaths, garlands and trees topped with witches flying around the top on miniature broomsticks.

The long dining tables are laden with a seasonal feast as seen in Harry Potter and the Philosopher’s Stone, complete with SFX flaming Christmas puddings and prop versions of the mouth-watering roast turkeys and hams studded with cherries.

I just hope the kids expect their Christmas dinner at home to be quite so elaborate!!

Nods to the festive season can be seen throughout the tour, with the Gryffindor common room and dormitory all sporting Christmas decorations.

The Slytherin common room was less festive, but we loved the attention to detail and these fabulous Christmas cards on display.

Hagrid’s Hut and even Hagrid’s model were also sprinkled with snow.

For the first time ever, explore a brand new addition to the festive experience at the Studio Tour as the trees and woodland in the Forbidden Forest gets a wintery makeover draped in layers of filmmaking snow.

Snow can also be found outside at the Night Bus, on the cobbled stones and magical shop fronts of Diagon Alley and the Hogwarts Castle model.

The Hogwarts Castle model looked fabulous dressed in snow and the kids were challenged to find two snowmen hidden somewhere on the model, which kept them busy!

At the base of the model, there is a demonstration of all the materials they use to transform the castle into a winter wonderland, so it doesn’t get damaged.

A visit to Hogwarts in the Snow is a real treat for any Harry Potter fan and is the perfect festive day out for kids who have outgrown the big man in red.

Hogwarts in the Snow runs until 16th January with tickets costing from £47 at https://www.wbstudiotour.co.uk/tickets/

Disclaimer: We were guests of Warner Bros Studio Tour for the purpose of a review. All thoughts and opinions are our own