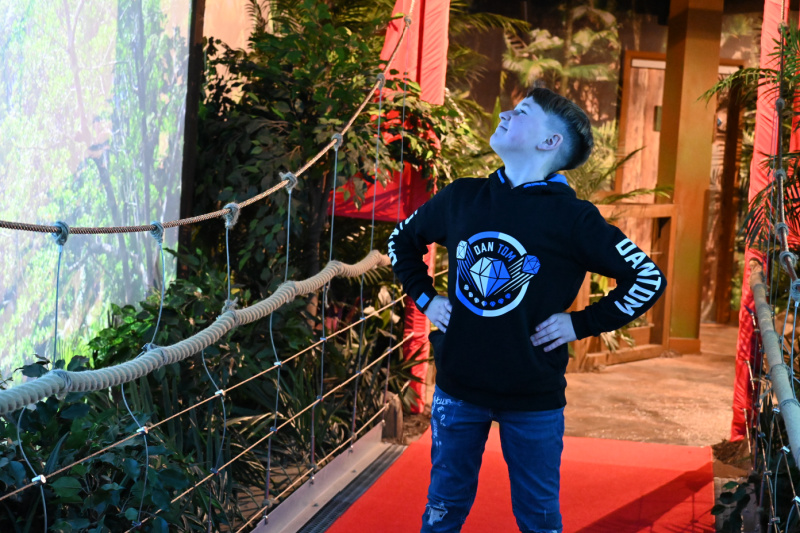 Isaac is a massive fan of the TV series I’m A Celebrity, Get Me Out of Here and for Christmas last year we bought him the Bush Tucker Trial Challenge Game with real edible insects, which was a lot of fun to play.

At the beginning of the summer holidays, the I’m a Celebrity Jungle Challenge was launched in Media City, Manchester and Isaac has been asking to go ever since.

Manchester is quite a trek from Dorset, but we were invited to review the Hyatt House Hotel in Manchester and decided to make a weekend of it and visit Harry Potter: the Forbidden Forest Experience at Arley Hall too.

We were joined by Tired Mummy of Two and her family to take the I’m a Celebrity Jungle Challenge, which made it more fun as the kids (and Dad’s) were super competitive.

Entry time is staggered, to help control the numbers, but once you have watched the Ant & Dec welcome video, you can do the challenges at your own pace. I highly recommend you fill out the disclaimers before you get there, but there are staff on hand to help you and allocate and set up your wristbands.

The aim of the game is to race against each other collecting stars from a bounty of physical and mental challenges all in an epic jungle setting complete with Main Camp, The Throne and Winners Bridge!

You collect stars using your wristband and the harder the challenge the more you collect. There are also 10 stars hidden on the ground level to find as well as 4 dingo dollar phones where you can score stars by answering kiosk Kev’s questions correctly, which gives spectators the chance to join in too.

Spectators also get 3 digital photos included with a variety of photo opportunities for you to use.

We started slowly with the jungle run, which doesn’t require harnesses or helmets.

This sees you take a series of mental and physical challenges as you try and do the low level assault course and remember the order of the coloured pattern at the end of the course.

Everyone could take part in the Kiosk Kev challenge, which has you attempting the infamous “In a recent survey” questions. I was surprisingly bad at it!!

The treehouse is the only other activity where you don’t need your harness and sees you take a memory challenge before sliding down a large metal slide.

You can take the challenges in any order you choose, so it is worth seeing what is busy and what isn’t. The 8m climbing wall had a small queue as only four of the walls were open, but we only waited about 5 minutes.

Choose your route carefully, as you get more stars for hitting the coloured buttons as you climb, with the yellow route easier than the red.

The ‘Treetop trail’ is a high ropes style assault course, with bridges, nets and giant balls to try and get around.

At the end of the course is the Leap of Faith, where you have to leap and grip onto a giant bag for 10 seconds. Next door to this is a pay extra activity – the Roll Glider which sees you sore through the air as you try and remember the order of animals on the screens as you go around the course.

There is another chance to fly, with the Jump the lights is a zip wire, where you collect more stars for leaping when the light flashes.

Not only does the wristband collect your score, but it also stores your digital images of the day and all tickets include up to 5 free digital photographs of your time in the Jungle, although you must complete the challenges to receive all your photos.

The kids kept radiating towards the Jungle Scoreboard, with it being a close-run battle between Isaac, his Dad and Lizzie to be crowned King, or Queen of the Jungle.

Isaac was the winner of the day and really milked his walk across the winners bridge to fireworks and paper canons on screens either side.

On the exit there is a themed shop, offering a good selection of reasonably priced I’m a Celebrity themed products. Isaac insisted on getting a King Of The Jungle T-shirt!

I’m a Celebrity Jungle Challenge is not cheap, however, it is comparable with the likes of Go Ape and has the added bonus of collecting stars and having digital photos included in the price package.

It costs £30 per adult, children under the age of 18 but over the height (1.35m) and weight (4st 10lbs) restrictions below cost £27.50 each to take part and spectators are £10. For us, although Sebby was old enough to join in, he was too small, so had to spectate, but he enjoyed collecting the stars and taking the Dingo Dollar Challenge. There are some cheaper early evening weekend tickets available if you are able to be flexible with your time.

All in all, it is brilliantly themed and the kids loved it and want to do it again, although I would like to see a few more challenges as we wvere finished within two hours. If we lived closer, it would make a great venue for a birthday party!

Would you like to try the I’m A Celebrity Jungle Challenge?