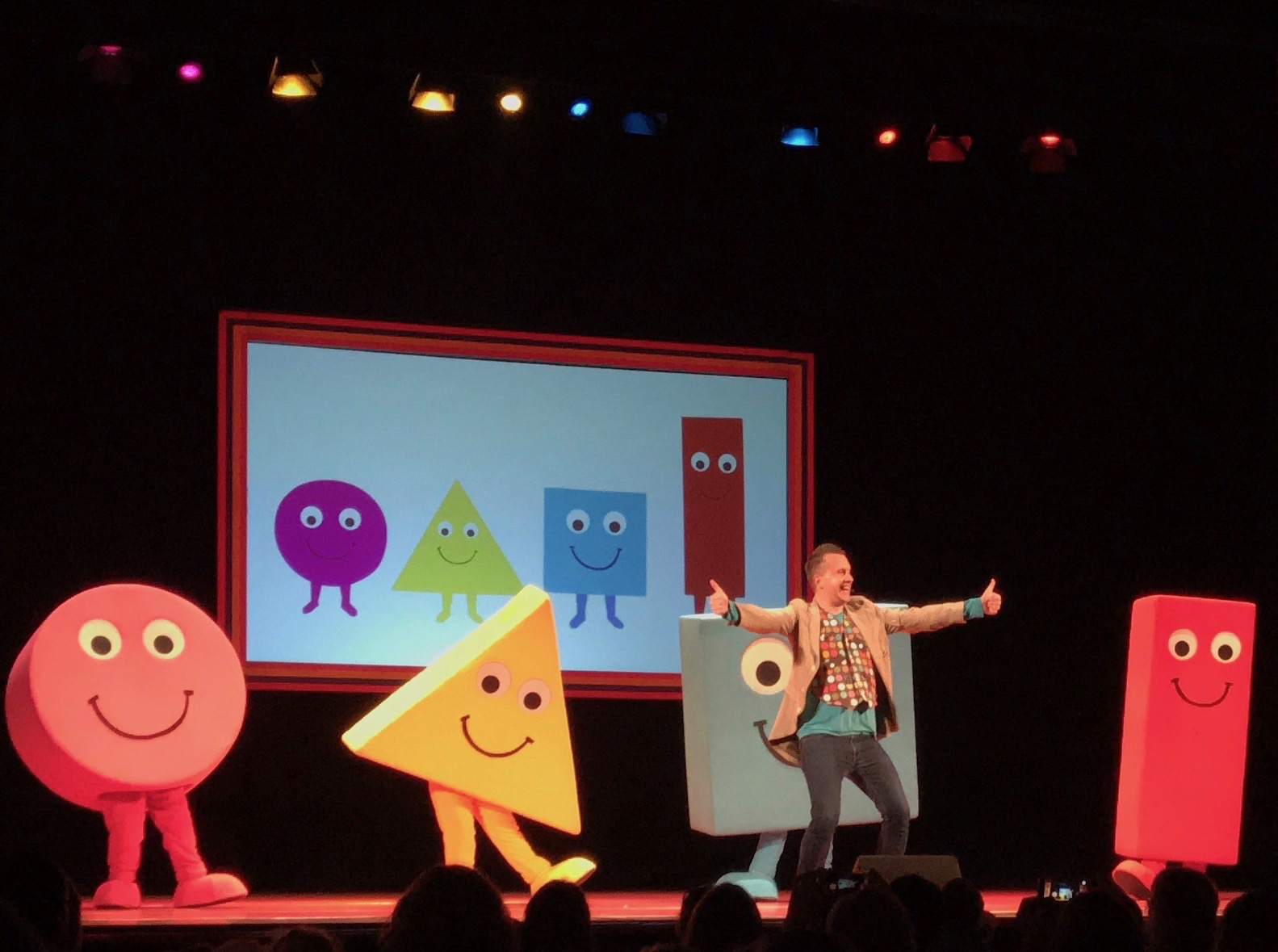 We are big fans of the cast of CBeebies as the kids have all grown up watching them.

We have seen many of them perform live, including, Alex, Andy, Katie, Mr Bloom, the Rhyme Rockets and Sid but one that had eluded us until this year was Mister Maker and we caught our first glimpse of him in the pouring rain at Camp Bestival. 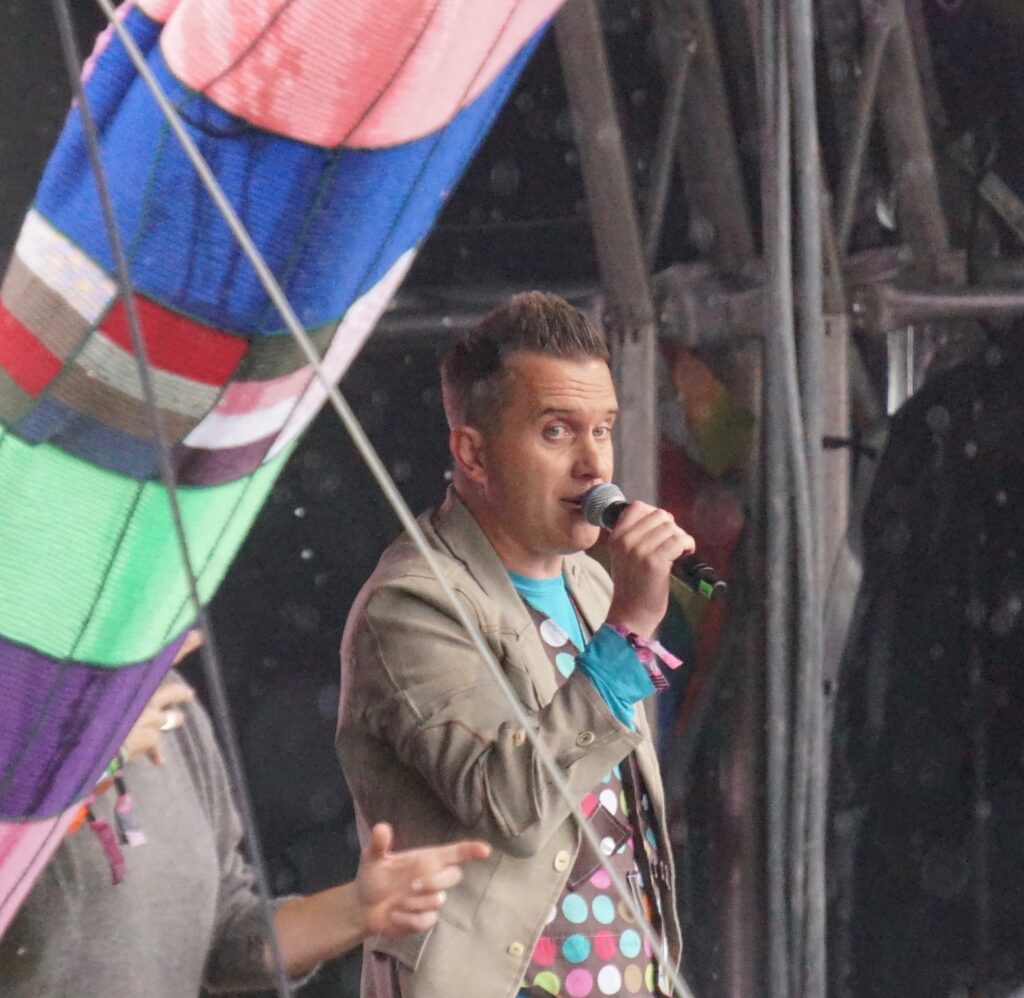 His show was full of fun and his infamous sidekicks, the Shapes, were there too.

Camp Bestival only shows the highlights of his Mister Maker & The Shapes Live tour, so when I found out it was touring and heading to Bournemouth Pavilion I knew the kids would love it.

In a bizarre twist of fate, it coincided with Bournemouth Arts by the Sea Festival so we headed into town a little early to see some of the fun in Bournemouth Gardens. 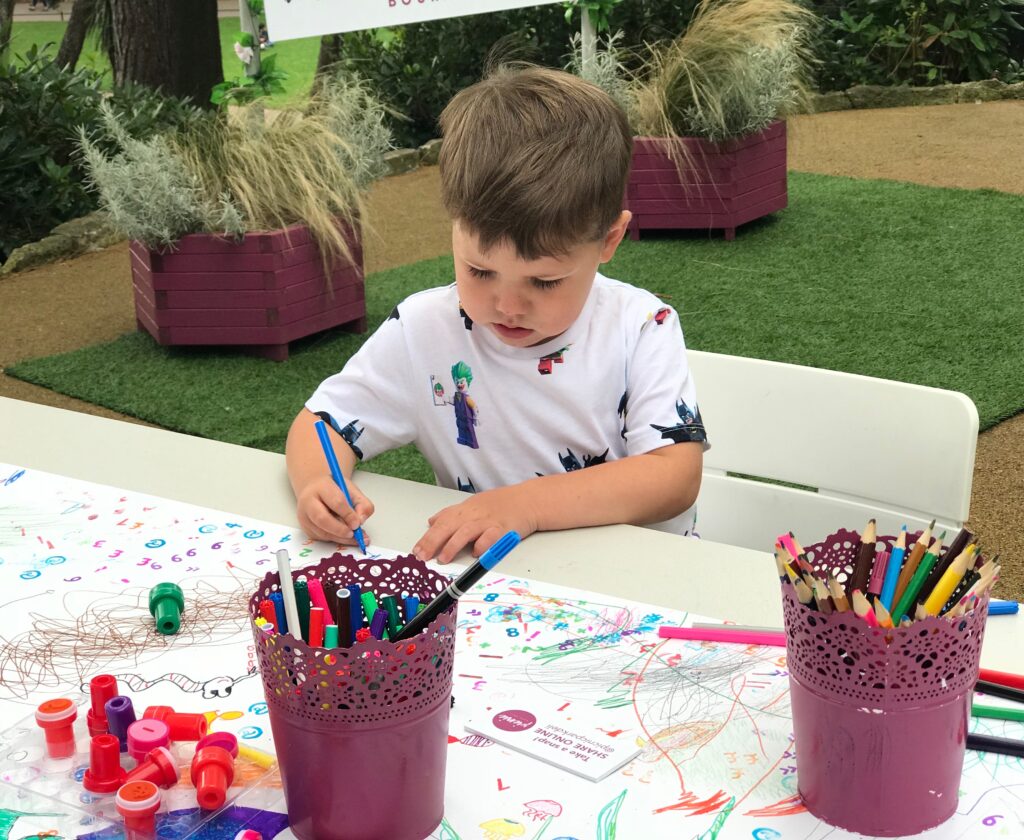 There were lots of weird and wonderful things to see and do, including getting to do their own artwork…… 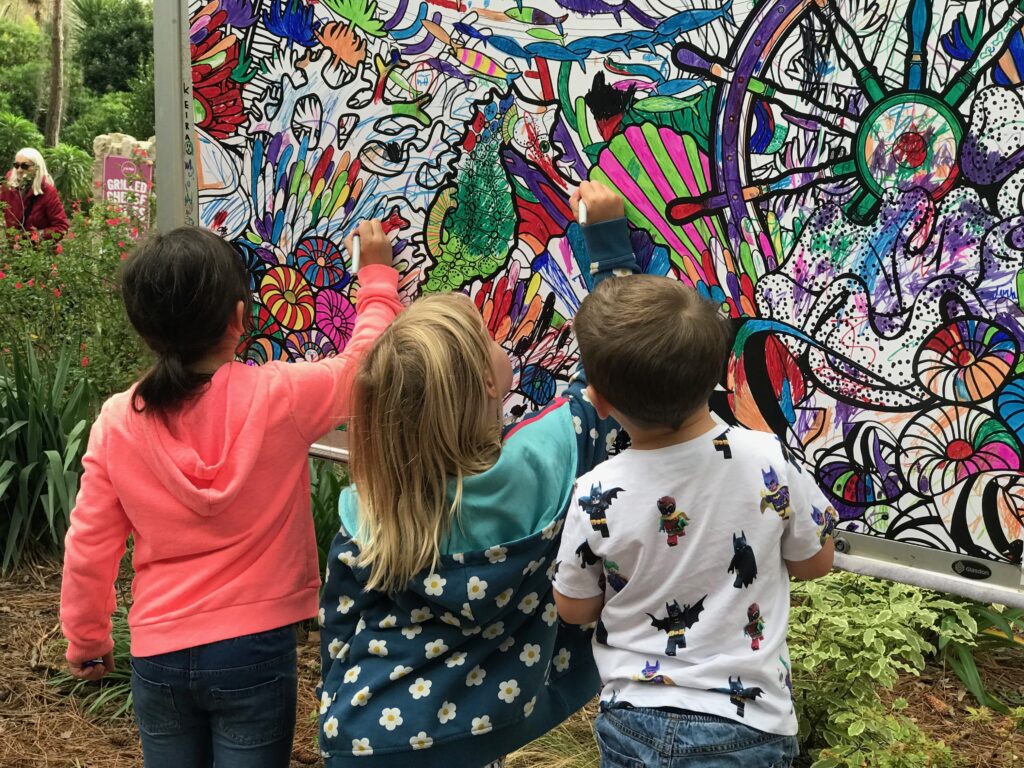 Making their own music….. 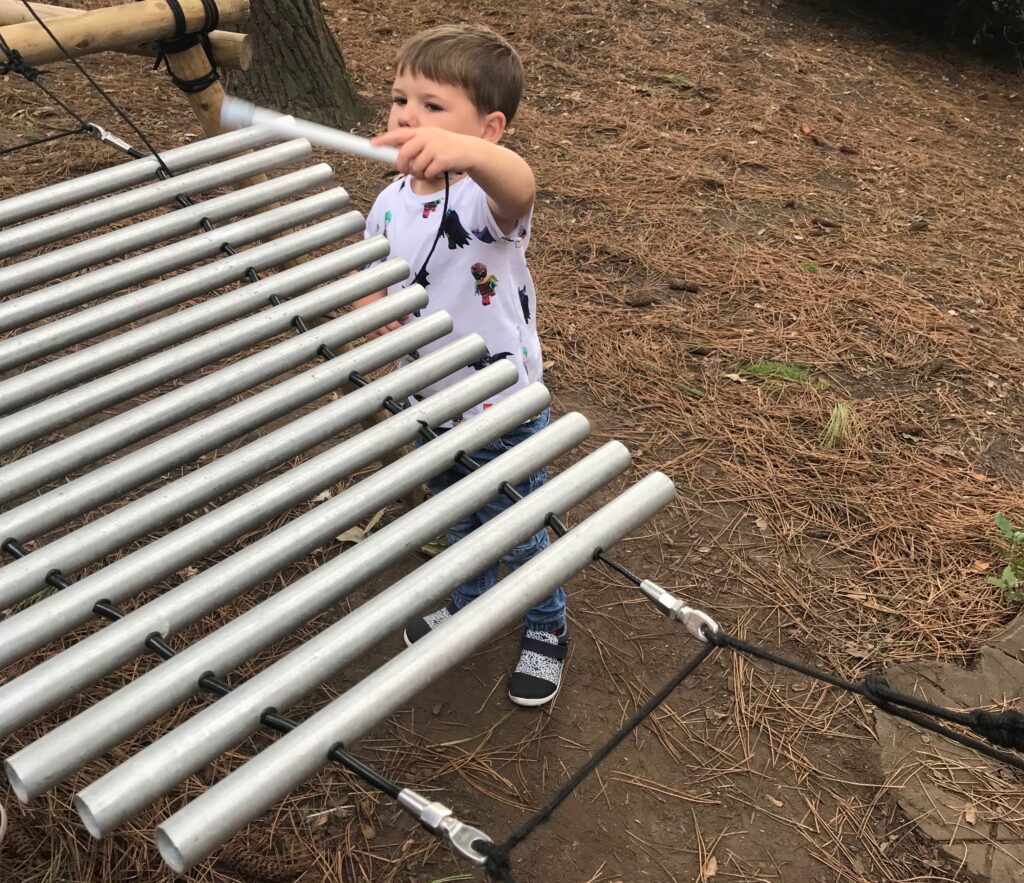 ….and seeing the bizarre and wonderful artwork that was on display, with much of it highlighting the issue of sea pollution. 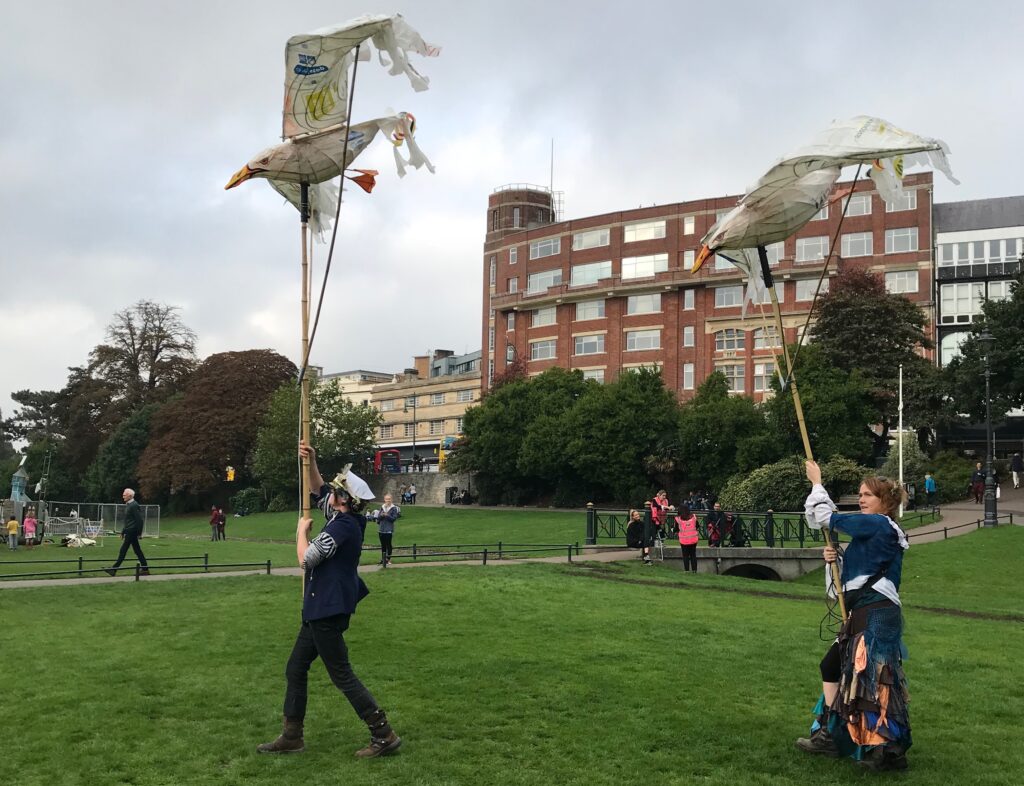 It was soon time to head back into the Pavilion, where the kids were handed a piece of coloured paper and waited for the show to start.

The fabulous supporting cast opened the show with singing and dancing which had the kids joining in from the off.

I had worried about how he was going to keep the kids interested in a theatre show but it is one of the most interactive theatre shows we have seen and every single part got the audience involved with singing along to songs we all know and love, with a Mister Maker twist, clapping and even rolling paper sheets into balls to help create the shapes on stage.

The kids adored the show and were all inspired by the items that were created. These can be viewed online when you get home, with downloadable instruction sheets to help recreate everything made in the show.

The second half of the show welcomed The Shapes onto the stage, with Circle, Square, Rectangle and Triangle too joining in the fun. 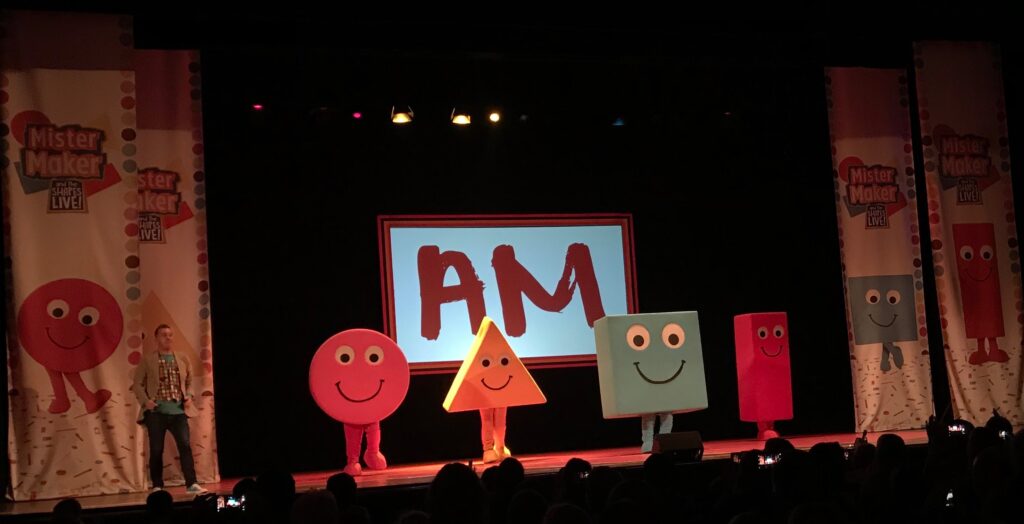 Unlike many other shows you are positively encourage to take photo’s and videos of the onstage antics and the kids joining in. I am only disappointed that I only took my iPhone, but I did manage to catch the kids dancing in the aisles. 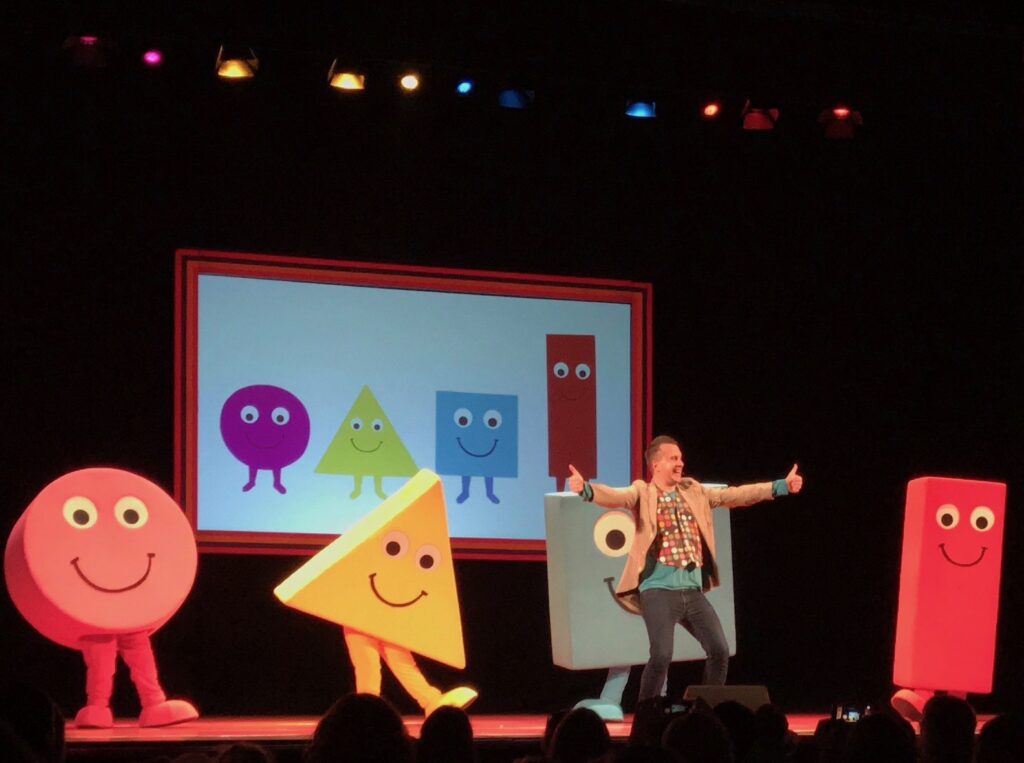 You still have time to catch Mister Maker and the Shapes, as they are touring the UK until 12th November.

It was such a hit the kids were singing and dancing all the way home!! 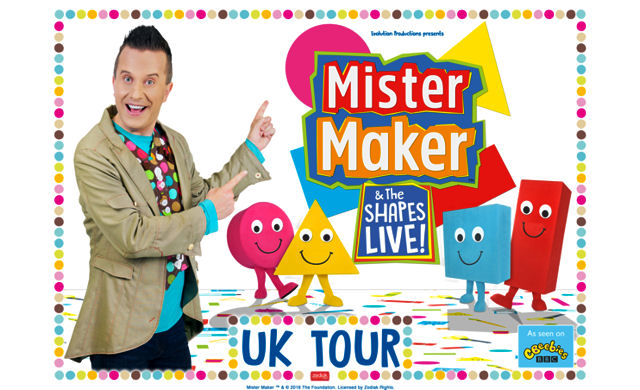 CBeebies’ arts and crafts hero Mister Maker is back on tour with the hit live theatre show, Mister Maker & The Shapes Live! With a … Read more 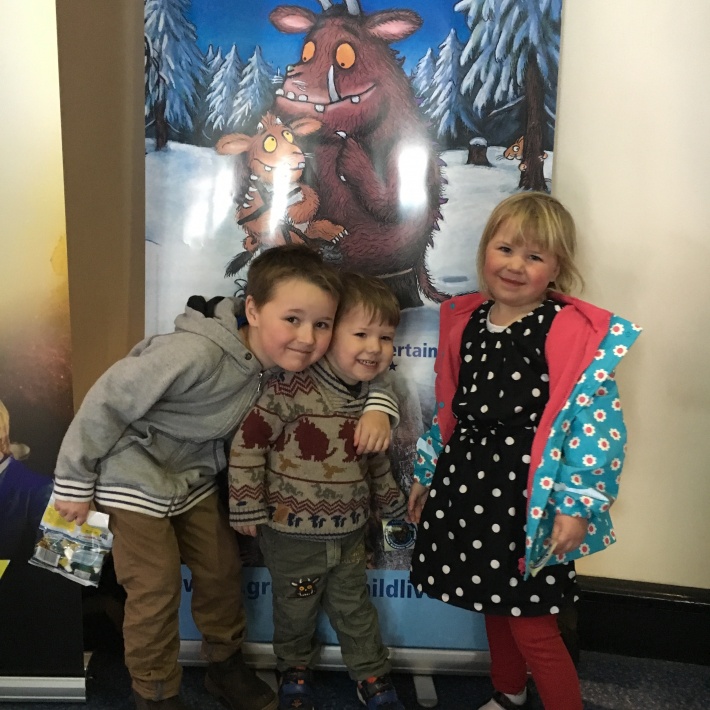 On Easter weekend we were lucky enough to be invited to see Tall Stories’ clever production of the Gruffalo’s Child at Lighthouse Poole.

We saw the Gruffalo Live a couple of years ago and the kids adored it so we were looking forward to seeing what they had to offer this time.

The Gruffalo’s child is the sequel to The Gruffalo, which sold over 13 million copies and won several prizes for children’s literature. The story follows the Gruffalo’s daughter on her adventurous pursuit in search of the “big bad mouse”, the only creature her father is truly fearful of.

We sat down ready to begin and much to the kids delight the mouse was scurrying about on stage and came into the audience before the show started.

A simple set of just a few movable trees make up the “deep dark wood”, but surprisingly it works really well. The cast of just 3 are hugely talented and had the audience in the palm of their hands whilst watching this magical, sometimes funny, sometimes scary adaptation of Julia Donaldsons’ book.

Practically all the text from the book is used as the framework for the show and this is expanded wonderfully by a collection of catchy songs and snappy dialogue that very much keeps the spirit and feel of the book.

The inquisitive Gruffalo’s Child is played brilliantly by Sophie Alice whilst Catriona Mackenzie doubles up as Narrator and The Mouse, bringing all the characters together. I have to say though that it is Duncan Maclnnes who steals the show as not just The Gruffalo, but as the bumbling old RAF wing commander-like Owl, the wheeler-dealer Fox in a Trilby and rain mac and as the rather bonkers Snake complete with a spangled silver jacket who loves to dance.

With a simple to follow story, fun songs, a guest appearance from the Stick Man and some brilliantly acting this charming, imaginative and really enjoyable story kept us all entertained for 55 minutes. 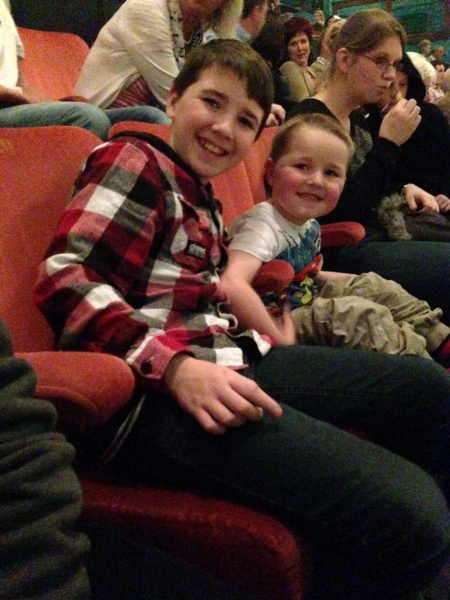 Have you ever thought of taking the kids to a theatre show? Are you worried they are too young and won’t behave? My first tip … Read more